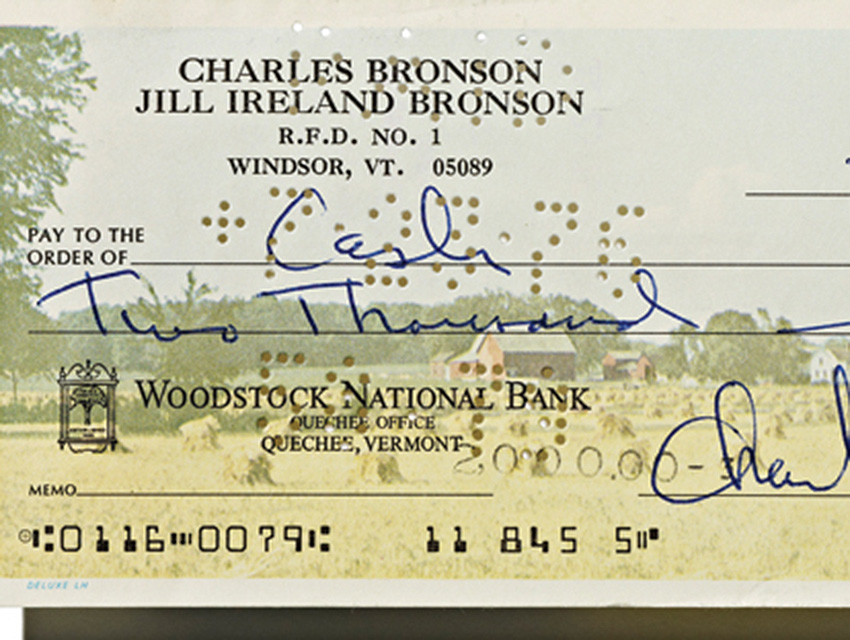 Membership dues or tennis balls? Who knows what Errol Flynn purchased with a $2.59 check to the Racquet Club of Palm Springs. These days, when even D-listers use money managers, it’s startling to see that Hollywood’s greatest swashbuckler tended to a financial matter so mundane. Flynn was not alone, as evidenced by Bill Harris’s collection of famous people’s checks. A onetime host of At the Movies (he and Rex Reed took over after Gene Siskel and Roger Ebert branched out on their own) and former correspondent for Entertainment Tonight, Harris has amassed about 100 checks. Some celebrities gave them to him; others he bought from dealers. Occasionally when interviewing a famous person, Harris used the checks to warm them up. “I’d bring five or six along and say, ‘Here’s something you might be interested in.’ With Sean Connery, who was not the easiest interview, I got through two or three names—Clark Gable, Warren Beatty—and he says, ‘Well, I hope you are not expecting to get one of mine.’ So I flipped to the last one in my stack: a check of his—paying a $50 golf bet to his publicist. I asked, ‘Why would I want two?’ He grinned in a way that said, ‘You got me.’” Here, Harris shares more stories about his collection.

Lenny Bruce
($450 to Jerry Sperry)
» “This check has a notation that says, ‘For Atty’s Fees. Narcotic #2.’ I have to assume it’s a narcotics arrest. Did the person who tried to cash it get him off or not get him off? We’ll never know. When I showed Dustin Hoffman—who played Bruce in the 1974 movie Lenny—this one, he was intrigued.”

Ella Fitzgerald
($18 to Pacific Telephone Co.)
» “She’s paying her phone bill. But if you look really closely, you see that the check has been ripped in half. Apparently someone—they’re known as ‘pickers’—picked it out of the trash, restored it, and sold it to a dealer who sold it to me. People magazine did a story on a picker once, and I called him up. I said, ‘I want all the pill bottles you have’—I have a celebrity pill bottle collection, too. He said, ‘I’ll be out in L.A. in January.’ I asked why, and he said, ‘Christmas cards!’”

Clark Gable
($69 to M.B. Berry)
» “This check is as good as it gets, isn’t it? I was told it was to his veterinarian, but the endorsement on the back says, ‘Encino Pharmacy.’”

Katharine Hepburn
($45 to Rod Colbin)
» “I was friends with the actress Edie Adams, and she gave me two checks made out to Edythe Adams from Ernie Kovacs. Kovacs’s checks turned out to be very, very valuable, and I traded with a dealer for this Hepburn check, which I noticed hadn’t been cashed. The dealer said the story was that Rod Colbin was her personal masseur, and he was savvy enough to get a check every treatment—instead of waiting to bill once a month—so he would be able to sell every check to an autograph dealer. I believe this check was valued at $450.”