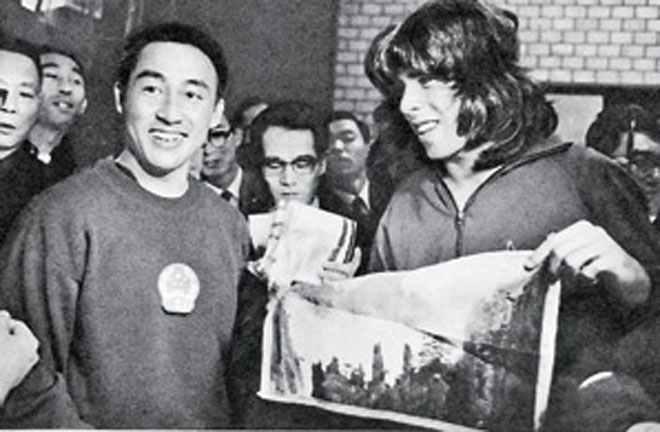 A BLACK-AND-WHITE PHOTOGRAPH preserves the moment the world changed forever. On the left is Zhuang Zedong, China’s most storied table tennis champion. On the right is Glenn Cowan, an up-and-coming American known for his long hair and gregarious personality. They are showing off the presents they exchanged at the 1971 international championships in Nagoya, Japan: Cowan is holding a tapestry of the Huangshan Mountains, Zhuang a T-shirt emblazoned with a peace sign and the words LET IT BE. Their broad guns suggest more than a polite response to a foreigner’s gift.

Just days after the image appeared in newspapers around the globe, the Chinese delegation unexpectedly invited the U.S. team to tour the mainland. In the midst of both the cold war and the Vietnam War, Cowan and 14 companions were whisked to Beijing, becoming the first Americans to venture behind the bamboo curtain since the Communist takeover in 1949. Their journey turned out to be the first public move in a rapprochement between the most powerful nation and the most populous.

“The ping heard round the world,” Time magazine said. “Probably never before in history has a sport been used so effectively as a tool of international diplomacy.”

Wearing purple bell-bottom corduroys and a floppy yellow hat, Cowan grabbed the spotlight during a weeklong series of exhibitions and photo ops. “Chou, 73, and ‘Team Hippie’ Hit It Off,” read a front-page headline in The New York Times after the 19-year-old Santa Monica College student broke protocol and engaged Chinese premier Chou En-lai (now known as Zhou Enlai) in conversation. Virtually unknown before he went to Asia, Cowan returned to L.A. a full-blown celebrity. He was a guest on Carson, and he traded quips with Dinah Shore. There was talk of a TV variety show that could position him to be a spokesman for the nation’s youth. U.S. table tennis officials, while privately aghast at his “Make Love, Not War” lifestyle, hoped that his popularity and his plan to start a national chain of Ping-Pong centers would boost the profile of their niche sport.

In the time it takes to slam the ball across the net, however, the opportunity passed. Fame seemed to unhinge Cowan—once he was treated like a rock star he came to believe he was a rock star—and he began to experience episodes of the mental illness that would torment him for the rest of his life. None of his outsize dreams would be realized, nor would table tennis escape America’s musty basements. Shortly after the historic U.S. team visit, President Richard Nixon and Chairman Mao Zedong met in Beijing, and in 1979 their countries established official relations. By then, Glenn Cowan the accidental diplomat had been forgotten.

COWAN GOT INTO TABLE TENNIS the way most American kids do. His father, Phil, a television executive, showed up with a table at the family home in the New York suburb of New Rochelle. Glenn was “obsessed,” says his mother, Fran. “He and my husband would fly to tournaments on weekends and come home with trophies. I must have had over a hundred trophies.” In 1966, father and son traveled to Southern California for a tournament, fell in love with Los Angeles, and persuaded Fran to move to Bel-Air.

Glenn attended University High, but he received his table tennis education at the Hollywood club-cum-hangout run by Milla Boczar, the patron saint of L.A.’s highly competitive Ping-Pong scene. The 15-year-old honed his strokes at tables stuck between the gigantic pillars that dominated Boczar’s cozy second-floor space. He sometimes took on men who were twice his age, including Erwin Klein, the aloof, four-time U.S. singles champ, and Jack Howard, the IBM engineer and Harrison Ford look-alike who would captain the ’71 team.