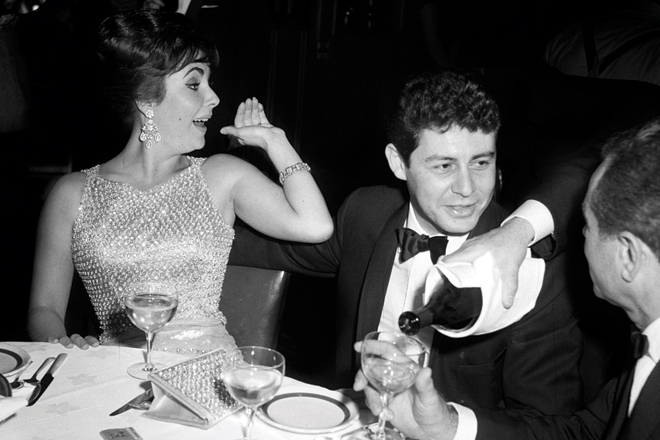 The house I grew up in in West Los Angeles, back in the late 1940s and early ’50s, had an immense kitchen, but it was used mostly for the construction of brown-bag school lunches and the heating of TV dinners and frozen potpies. My parents went out to dinner far more than they ate at home, and for good reason. Mom couldn’t cook, and Dad, fortunately, brought in good money writing screenplays at the movie studios. They patronized most of the well-known places of the era, both fancy and casual: Romanoffs, the glamorous Hollywood hangout presided over by a Lithuanian pants presser who claimed to be a Russian prince; pricey, soigné French-continental establishments like Vendome and LaRue; the House of Murphy, a self-styled “New York steak house” whose motto was “It’s my life. I live it. I love it. Criticism be damned”; Armstrong Schroder, an upscale 24-hour coffee shop famous for “little thin hot cakes”; the dining rooms at the Beverly Hills, Beverly Wilshire, and Bel-Air hotels. At least some of the time, they took me with them.

My parents’ favorite of all was Chasen’s, on Beverly Boulevard at Doheny (the site is now a Bristol Farms market). Opened in 1936 as a chili parlor-cum-barbecue joint by ex-vaudevillean Dave Chasen and his wife, Maude (with Harold Ross of The New Yorker as their backer), Chasen’s had grown into a clubby, comfortable show business watering hole by the time I was born. I first went there when I was literally a babe in arms. Later I toddled around the restaurant, probably passing an actor friend of my parents’ named Ronald Reagan and his then-wife Jane Wyman digging into their dinners (it is said that he later proposed to Nancy there); maybe bumping into a chair at Alfred and Alma Hitchcock’s table (they sat at the same one, just to the left of the front door as you entered, every Sunday night); perhaps eliciting an indulgent smile from Jimmy Stewart and a disapproving grimace from Louella Parsons—or vice versa, for all I know.

As I got older and started paying more attention to what was happening around me, I realized that I loved going to Chasen’s. It wasn’t just dinner; it was an experience. We’d always dress up—it was that kind of place—Dad in a suit and tie from Jerry Rothschild, Mom in something bright and bold from Saks or Bullock’s, accessorized with pounds of costume jewelry and clouds of Shalimar, my sister Merry and I in our Sunday go-to-Mass duds. Pulling up to the restaurant in our Buick sedan, we’d be welcomed by the parking attendants (my parents sometimes hired them to wrangle cars at our house when they were hosting a big party) and ushered into the vestibule. I remember vividly the scent of the fur coats in the checkroom just inside the door blending with the aromas of liquor, cigarettes, and Sterno (there was lots of chafing dish cookery going on) that leaked in from the dining area. I also remember the amazing and—to me—confusing painting that hung over the front door: a portrait of W.C. Fields as a grumpy-looking Queen Victoria (the work, I later learned, of the notorious Hollywood artist and party giver John Decker). We’d then proceed to the dining room, to be greeted effusively by the maître d’hôtel or by Maude or Dave Chasen themselves.

The walls at Chasen’s were covered with photographs and assorted framed memorabilia. For years on the right wall of the front dining room was an eight-by-ten blowup of a “candid” snapped by my mother of two diaper-swaddled baby boys, myself and Peter Ford (son of the actor Glenn Ford and the dancer Eleanor Powell), lying on a towel in the sun, apparently having an intense conversation. By the time I was seven or eight it had become an embarrassment to me—Mom never failed to point out the photograph when I was introduced to someone at the restaurant—and I was happy when it migrated to the wall in Dave’s office, which always smelled of leather and cigar smoke.

We didn’t have a regular table like the Hitchcocks, but we usually sat in the front room, with its booths of firm, high-gloss green leather. The room in back where the bar was had a more rakish and tentative feel (the booths were red), which appealed to me increasingly as I grew older. My parents would order a shrimp cocktail or chicken broth or consommé, then whitefish or chicken breast with wild rice or prime rib or steak or lamb chops (with mint jelly)—always well done. My own favorite dinner as a youngster at Chasen’s was a parsley-flecked ground sirloin steak with a side order of O’Brien potatoes. These were potatoes diced into perfect cubes and fried crisp and golden brown with bits of onion and red and green bell pepper (to this day I consider them quite possibly the finest potatoes I’ve ever eaten, my platonic ideal of spuds). If I was lucky, I’d be allowed to follow this repast with one of the celebrated house desserts, a snowball—vanilla ice cream coated in shredded coconut, with warm chocolate sauce spooned over the top. Later I came to appreciate the restaurant’s Caesar salad, made tableside with many flourishes, the Dover sole and theplaice meunière, and above all the renowned “hobo steak,” a thick New York cut roasted very rare in a crust of salt, then freed from its enclosure, sliced, and finished in butter in a copper sauté pan at the table—all the more delicious because it wasn’t on the menu and you had to know the restaurant well to ask for it.

Chasen’s may have been my first restaurant, but by the time I was 10 or 12, I knew my way around at least a dozen other ones. I munched the irresistible cheese toast at the Brown Derby in Beverly Hills while Bob Cobb, inventor of the Cobb salad, chatted with my mom about a party the week before at the Kirkebys’ mansion in Bel-Air (the one that later stood in as the Clampetts’ house in The Beverly Hillbillies). I devoured pot roast and French apple pie with my father at the bustling commissary at 20th Century Fox and ate Monte Cristo sandwiches with him at Lucey’s, a great Hollywood hangout near the old RKO studios (unrelated to Lucy’s El Adobe), as Robert Mitchum sipped martinis at the bar and 1920s gangsters and 1870s Indians, in full costume and makeup, slurped spaghetti in corner booths. I ate prime rib au jus (pronounced “o juice”) carved on a silver-domed cart by a white-haired chef named Henry, who greeted me by name, in the plush dining room of the Beverly Hills Hotel—and later at El Padrino in the Beverly Wilshire Hotel, where he had followed his master, the gentleman hotelier Hernando Courtright.

I’d go to airy, flower-filled tearooms with my mother when she went shopping (I liked the Waldorf salad at Bullocks Wilshire and the club sandwiches at El Encanto in Westwood Village). If I was good, I’d get taken to the original Southern California Blum’s, on Camden in Beverly Hills, where the main attraction was the do-it-yourself sundae cart that was wheeled around to the tables—a dozen or so kinds of ice cream and every topping imaginable, to be assembled and combined and overdone at whim. (I later fell in love with Blum’s coffee crunch cake and its hamburgers, served on slightly chewy, square flour-dusted rolls—whose flavor and texture I still miss.) At an institution called the Kings, on Santa Monica Boulevard in West Hollywood, I encountered my first live lobsters, which languished in big glass tanks against one wall—and found, probably to my parents’ surprise, that the notion of picking out my dinner while it was still alive didn’t bother me at all. At Trader Vic’s (originally called the Traders) in the Beverly Hilton, on the other hand, my favorite dish was a ground beef patty served with a fried banana and an English muffin. In my teenage years I became a regular—first with my parents and then on my own—at Scandia on the Sunset Strip, an ostensibly Scandinavian restaurant that at its height could have held its own with any French eatery in the country.

With so many meals under my belt—where, unfortunately, they soon started to show—it was no wonder I felt qualified at the age of 25 to offer my services as a restaurant critic to Holiday magazine. They accepted, by the way, but scotched their dining guide before my first contribution could appear. I soon found other outlets for my reviews and have been writing about food for four decades now. Sadly Scandia, like every other place I mention here (except the much-changed dining rooms), is long gone.

I didn’t go to Chasen’s that often after my parents died in the mid-1970s. There were so many other places at which to eat in L.A. by then, and I lived many miles away. I did decide to take my then wife, Paula, to Chasen’s on Christmas Eve of 1992, mostly to give her a taste of my childhood. Dave had died 19 years earlier, and Maude wasn’t there—her health had begun to fail. I’m not sure we saw any celebrities, but the dining room had its Old Hollywood magic, and the Caesar salad and hobo steak were terrific. We agreed as we finished eating that we should make Christmas Eve at Chasen’s a tradition. When the holidays came around again, though, we were packing to move to the East Coast, where I had recently helped found Saveur magazine. The move was costly, and we decided we had neither the time nor the money for an indulgent evening out. This saddened me a bit, but hey, I figured Chasen’s would always be there, so I’d catch up one day.

I never got the chance. The restaurant’s fortunes were declining. Young Hollywood had never warmed to Chasen’s, and diners wanted charred rare ahi and magret de canard more than sole meunière and chicken with wild rice. With Maude almost gone, her family made the decision to close Chasen’s. It served its last meal on April 1, 1995. Well, almost. It reopened for one night a year later—the interior was still intact—for Ronald Reagan’s 85th-birthday party. Maude died in 2001, at the age of 97.

I mourn for Chasen’s. It was a constant in my life, even after I’d stopped dining there regularly. The very thought of it made me feel good inside. It was warmth and light and pleasant noise and seductive smells and pretty people; it offered the security of familiarity. It represented so much of what was good about my first 30 years or so of life: the jaunty style and glamour that we lived amid, the dependable and abundant food, the unity of family. To this day when I walk into an old-style establishment that reminds me of Chasen’s, an establishment my parents would have recognized as their kind of place—“21” in Manhattan is one surviving example—I feel a sense of comfort and safety, accented by a hint of gleeful anticipation. I always feel at least a little bit at home.

Colman Andrews is the editorial director of the dailymeal.com and the author of five books, most recently The Country Cooking of Ireland—named the 2010 James Beard Foundation Cookbook of the Year—and Ferran: The Inside Story of El Bulli and the Man Who Reinvented Food.