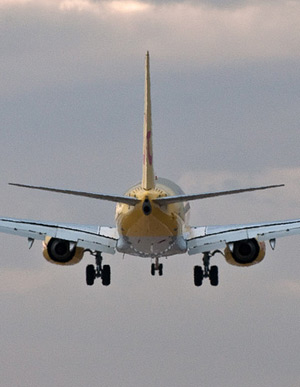 Kevin McCoy woke up Sunday morning, wife Debbie beside him, within a gleaming pyramid 36 stories above Las Vegas. South and east of the pyramid, humped carriages of titanium and aluminum were already rising, jets bound for all points. Kevin, swaddled with Debbie in the Luxor’s cotton-poly hotel linens, was already strategizing how to beat the crowds for the retreat back to L.A. Last night had been different, relaxed. In Vegas for the weekend to see old friends, they had shared dinner in the Eiffel Tower, taking turns between courses to admire the Paris. Back in L.A., the real world, where Kevin is a food-service executive, there was a house in La Cañada Flintridge, and rosebushes, and a four-year-old daughter waiting for their return that afternoon.

McCarran. The airport loomed in thought form behind hotel doors all across Las Vegas that March morning. As the resorts have gone up, so has the number of flights between L.A. and Las Vegas. There is now an average of 78 flights daily between McCarran and L.A.’s three principal airports—LAX, Ontario and Burbank. About 11,000 people a day board those jets. The McCoys had a 3:00 booking on Southwest into Burbank, and Kevin was looking toward an early arrival at the gate, maybe 1:30, to beat the crush you can find in a Southwest waiting area on Sunday afternoon. More than any other airline, Southwest has successfully monopolized its growth alongside Las Vegas’s. Since 1990, the carrier has gone from 3 gates at McCarran to 16, from 1.3 million passengers to 8.6 million last year.

Early arrival, however, was always the secret. One last sweep through the bathroom for left-behinds, and Kevin and Debbie were out the door and into one of the Luxor’s elevators, dropping at a 38-degree angle along the pyramid’s interior slope. There was something about that descent, sideways and all wrong, that caused a momentary flutter in Kevin. A little different, he thought.

Carlos Martinez spent Sunday morning lying on the couch in his parents’ Arleta home watching a Spanish broadcast of a soccer match before his 2:00 shift at the Hollywood Way Chevron station opposite Burbank Airport. Martinez is a sweet kid, tall and lanky with the posture of al dente spaghetti, a toothy, rabbity smile and a short, gelled boy-band haircut. His favorite team wasn’t playing, but it didn’t matter. He watched whatever game was on, keying into the announcer’s soaring, smooth rise of Spanish verbs whenever the ball flew at the goal. It was enough to make a kid think about his job.

From the little glass booth with the tinny speaker, Carlos had watched takeoffs and landings across Hollywood Way for six months, always looking up from whatever he was doing at the sound of a reverse thruster. There was something unformed and threatening about the way the jets landed at Burbank, crashing toward him through the rubbery mirage air above the tarmac, taking on detail like a thing speeding out of a dream, waiting until almost the last moment before turning away from the blast fence and the street to dock at the gate. He had wondered about planes coming through that fence before—dreamy, adolescent-boy thoughts of immolation, and heaven and hell, and do you have a soul when the flesh is burned down to gristle, hair and greasy bone by some 5,000 pounds of explosive Jet A fuel.

Jets had crashed through the blast fence before Carlos’s tenure in the glass booth, though he didn’t know it. At least four times in the last 20 years, aircraft have spilled off Runway 8 and onto Hollywood Way in a shower of sheet-metal tiles and brick dust. Runway 8 is notoriously short—6,032 feet of grooved concrete aimed at a busy street and a gas station. Eighteen miles away at LAX, runways accommodating the same jets are as long as 10,000 feet. Burbank, however, is not the nation’s only airport to experience overruns.

At New York’s La Guardia, four jets have either landed too soon or overshot runway terminuses in the last decade, killing 29 passengers. Last year in Little Rock, 11 passengers were killed when an American Airlines MD-80 barreled off the tarmac into a series of approach-light stanchions. Jets have overshot runways at airports in Charlotte, Erie, Dallas, Tucson, Baton Rouge and Nashville in recent years, each time leaving a bout of hand-wringing in their wake over what should be done. In response, the Federal Aviation Authority has set standards for airports built from 1988 on—a very small percentage of the nation’s airports—requiring 1,000-foot safety zones be slotted onto runway boundaries. Older airports have been encouraged to lay down foam beds at the ends of runways to slow runaway planes. (Both “standards” are unenforced.) Unfortunately, the Burbank Airport Authority has deemed Runway 8 too short for either option and the airport property itself too small for runway expansion.

Carlos’s mother walked into the living room and stood in front of the set. It was 1:00, an hour until his shift and time to get ready.

Over his prime time Shuttle radio, Abayomi Omolewu learned that he had a pickup in the Burbank terminal—two arrivals bound for Simi Valley—and rolled through the early afternoon rain toward the airport’s entrance. It was his first week at Burbank after eight years working LAX, often ferrying immigrants, as he himself had been 20 years ago when he arrived in Los Angeles from Nigeria. A younger Abayomi, dreaming of America in Lagos, had failed to imagine driving a shuttle in Burbank, a dun-colored cement landscape when compared with the green Nigerian coastal plane. And the tiny airport was now affording him fewer passenger trips than LAX.

Nevertheless, the terminal’s air traffic was booming, with low-fare airlines like Southwest flooding Burbank’s runways to take advantage of cheaper landing fees. In the decade since Southwest began colonizing gates at both McCarran and Burbank, flights into the latter have increased by more than 40 percent—nationally, flights have risen by just 25 percent. At its busiest, the airport has handled nearly 5 million passengers in a single year. Even in the early 1940s, when LAX was not yet a commercial flight destination and Burbank functioned as Los Angeles’s primary airport, the terminal saw less than a quarter of its present traffic. In recent years, the Burbank Airport Authority has sought to move and expand the terminal because by FAA standards it is 450 feet too close to Runway 8. Community activists, however, see any terminal construction as an invitation to more flights, more noise, more impact on the city.

As far as Abayomi, picking up his passengers and heading for Simi, was concerned, not only was there no room for expansion at Burbank, there was also a disconcerting collection of chemical companies at the end of Runway 8, perhaps not the best buffer for an increased flow of jet landings.