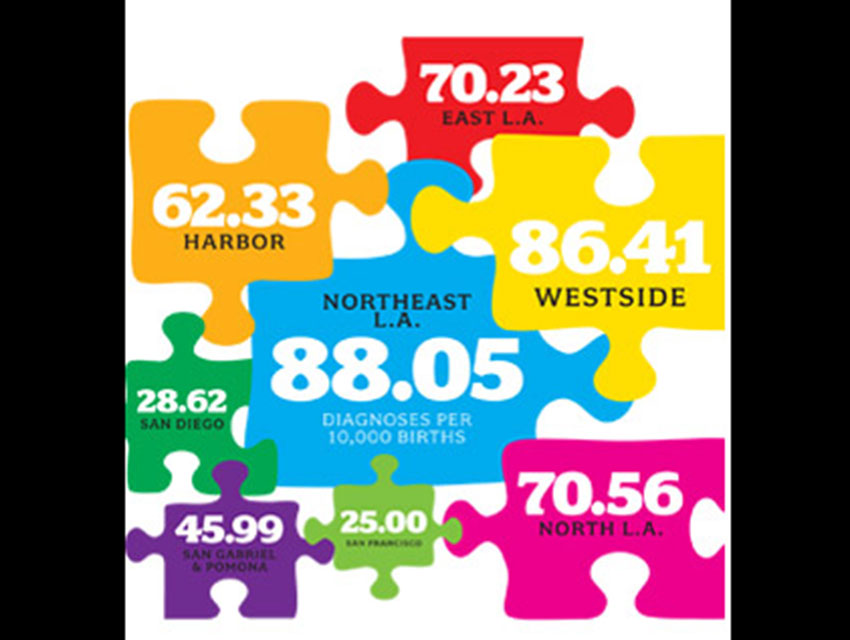 What are the early signs?
Traits typically show up when children are around three and include obsessive behaviors, lack of eye contact, and delayed speech.

Aren’t a lot of autistic people geniuses?
Some are geniuses, or savants, but that is not the norm. For the full range of autism spectrum disorders, as they’re called, click here.

How prevalent is it in L.A.?
In a state that has one of the highest diagnostic rates of autism in the country, L.A. still stands out. Earlier this year statistics generated by UC Davis’s MIND Institute showed an average of 40 diagnoses for every 10,000 California children born between 1996 and 2000; in large areas of L.A. County (see above), the rate was more than twice that.

What causes autism?
This is hotly debated, and experts still can’t say for certain. Much of the current research is based on genetics, environmental toxins, and the more advanced age at which parents are having children.

What about vaccines?
A British researcher’s 1998 study suggested a connection between MMR vaccines and autism. The study was widely debunked and has since been retracted by the scientific journal that published it.

Does the state provide any help to families?
It does, but not as much as it used to. Services at publicly funded regional centers (which offer evaluations, therapies, and summer camp) have been reduced or eliminated as the governor and the legislature have slashed their budgets.

Is there a cure?
No. Some parents turn to chelation therapy (hoping to eliminate heavy metals they suspect are linked to autism) or to a diet free of wheat and dairy (to lessen symptoms they believe are triggered by a “leaky gut”), but there is no scientific evidence to support such treatments. What isn’t disputed is the efficacy of early intervention strategies, such as speech and occupational therapy, for many with the disorder.