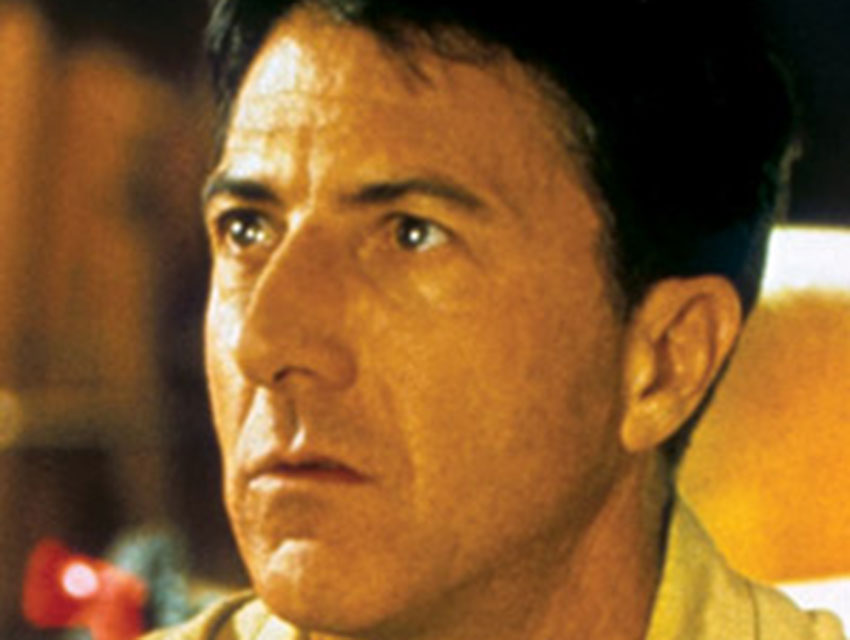 On the research he did to prepare:
Oliver Sacks had this long blackboard in his office, and when he was talking about savants, he made a chalk mark on the blackboard. He said, “You know that’s one. You don’t have to count that.” I said, “Right.” He made another stroke and said, “You know that’s two.” Then he went the length of the blackboard, chalking, chalking, chalking. And he said, “What you see at one, two, three, or four or five—these people see at this number,” which was 78 chalk marks or something. I said, “They’re like calculators.” He said, “No, they’re faster than calculators. A calculator has to calculate. They see it.” The toothpick scene in Rain Man is based on that.

On the dialogue:
We had prototypes that we relied on: Peter and Kevin Guthrie. They’re brothers. Kevin Guthrie was a football star at Princeton University. Peter was autistic and high functioning. We had lunch one day and were going bowling afterward because Peter loved bowling. So he was very impatient, tapping Kevin on the thigh with his finger. He said, “K-E-V-I-N, I want to go bowling.” He would spell the name when he wanted something or when he was very anxious or both. Tom Cruise and I both decided we would find a place to use that. During the lunch, I whispered to Kevin, “Does your brother know that he’s autistic?” He said, “Gee, I’ve never asked him.” And he asked his brother, and Peter’s answer is in the movie: “No. I don’t think so. Definitely not.” There’s nothing in my performance that’s invented. It was given to me. We compensated the Guthrie brothers because they were cowriters.

On feedback he’s received from parents:
I guess the most special moment was a couple of years after the film came out, I bumped into some parents who said they had a nine- or ten-year-old autistic son they took to see Rain Man, and their son had never made physical contact with them. Anyway, they were on their way home, and one of the parents said, “Did you like the movie?” And suddenly their son came forward from the backseat and embraced one of the parents.

On why the movie was such a success:
While we were making Rain Man, we used to joke we should call it Two Schmucks in a Car. We were living by our wits from day to day. Then it came out. Suddenly it caught on, even internationally. I remember thinking, Why? What I came up with was, We’re all autistic to different degrees. For most people it’s hard to receive compliments. When someone tells us “You’re really handsome” or “You’re really beautiful,” we stop making eye contact. It’s too powerful. I think that must be one of the aspects of autism. Eye contact is just too powerful for autistic people, because they’re dealing all the time on that level. It’s just much more intense for them. Their volume is up higher. And that in itself will alter you.