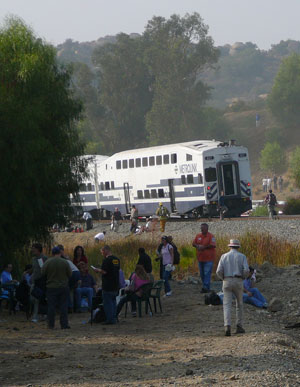 Katharina Feldman, 53, is the office manager at her husband’s law office in Encino. She happened to be home early on Friday, September 12, the day of the Metrolink crash. The Feldmans’s home is on a short street with only four houses. The street runs parallel to the tracks north of the Chatsworth station. At 4:23 p.m., a Metrolink commuter train collided with a freight train just beyond Katharina’s backyard. She called 911 to report the crash, then set to work helping everyone she could.

I was sitting in the back office talking with my dear mother-in-law, and I heard what sounded like a bomb. My house shook. My four dogs were with me, and they were very rattled. I said, “I think we have a train crash!” I hung up the phone and ran outside. That’s exactly what I saw. The cars were spilled out on their sides, and there was a fire — thick black smoke, very strong and intense. I immediately called 911. I gave them the address and explained what happened. I ran around and got to the crash site by a horse trail.

As I was running I was already seeing people trying to climb out the window of the train that was on its side. They were bleeding. There was blood coming from faces, noses, mouths, ears, everywhere. There were people stumbling about, in a daze. They didn’t know what had happened to them. At that point, a lot of the neighbors responded as well. Some ran up to the train to help pull people out. I was helping a woman who was probably in her 70s and had multiple facial injuries and broken teeth. She was walking very unsteadily and was very upset. She told me she was a victim of the [Jan. 26, 2005 Metrolink] train crash in Glendale, as well, and that she knew 9 of the 11 people who were killed on that train. Her injuries in this crash were pretty severe. She’d had knee replacements, and one of her knees was broken behind the replacement in this accident.

It was unbelievable. It was utter chaos with people running about. Then you’ve got all the responses—the helicopters, the fire department, and the media, oh my God! The noise from those helicopters alone was intense.

People were walking on the tracks because there’s an embankment on either side of them. The rescuers put the appropriate tags on people according to their injuries. They gave everyone a tag. If you were able, you put your name and address on it. The tags were marked with different colors. The color indicated the degree of injury. It was a scene out of a war zone. You didn’t know who had come off the train and who was there to help.

The fire department wanted those who could walk to cross the tracks and go over to the Chatsworth school’s grassy area, where they could triage and lay out the different color tarps—red, blue, and green, with red being the most severe cases, then green, then blue. The man I was with went to the red tarp. They were bringing people out on backboards and gurneys. You can’t even imagine. There was a woman who was six months pregnant. It was just utter chaos.

People were in shock primarily. Some were quiet, but there was a lot of moaning and crying when they were trying to get out of the train. One woman said, “I can’t find my friend—she was on the train with me. I can’t find her.” She was so upset. I didn’t know what else to do, so I just hugged her and was able to comfort her, which was wonderful. Then her friend came, and they were reunited. They cried and hugged.

I saw a man in his late 50s walking toward me bleeding from his head, which was openly lacerated, and from his nose and his legs. He just could hardly walk. He was in a pair of slacks and a nice shirt. He had a briefcase and a cap. He kept saying, “Please make sure they take my stuff with me. Don’t let them leave my briefcase here.” He was bleeding profusely. I helped him walk. He leaned on me—I’m a big strong girl. He had a back injury, and we kind of sat him down, and he tried to lie down, but he couldn’t. People brought cases of water and packages of paper towels and just everything they could think of. I washed his wounds and gave him water and called his wife for him. At one point I sat with my back to his back to give him support—there weren’t any more chairs. Every time he tried to lie down, he moaned very deeply. It was terrible. Finally they cleaned him up and put him in bandages and kept assuring me he’d be going to a hospital soon.

They started an IV, and I stayed with him and held it. I phoned his wife several times to let her know how he was, that he had some injuries to his face and his nose, that he was bleeding from his leg, and that his back was hurting terribly—but they were promising to get to him very soon. I told her that he was awake and alert and that I would call her with updates as I got them. She was watching the news on television in Simi Valley and was panicked, as anyone would be, knowing that your loved one is injured and you’re far away and you can’t get to them.

We walked him to a helicopter and he was airlifted out. Then I ran home because one of the firemen said that people were starting to get cold. The crash happened at 4:23, and by now it was probably close to 6 o’clock. The temperature was changing, plus you get cold when you’re injured and bleeding. So I ran home with a kid, and we carried blankets back and passed them out to people.

I came home and was up all night. I had firemen in my yard until Saturday afternoon. They cut my fence, and about 1:30 a.m., the police knocked on my door and said, “Please don’t look out your back window. You don’t want to see what’s going on now.” They were taking bodies out, and I know there were a lot of body parts. I didn’t want to see that. It was just crazy.

Pretty much everyone on the block helped, along with other people from the neighborhood. This is a wonderful community, Chatsworth. People are a little different here. We’re animal people. We all have horses and dogs. It’s just a real friendly, comfortable community.

Saturday afternoon I got a call from the man I had helped. He called to thank me and said that if it wasn’t for me and for all the people that responded, who knows what would have happened. He was very grateful and appreciative. He said I was his special angel. That was it for me. The tears came. That’s when it all came to a head. Wow.