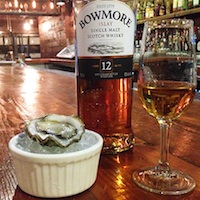 For some imbibing Angelenos, the Valley is an unthinkable trek, unless you’re blessed with unlimited Uber credit or a designated driver on standby. But Vantage Restaurant Group’s new seafood restaurant, Tipple & Brine, which opens on Monday, is already proving hard to resist. Its straightforward, approachable cocktail menu courtesy of Daniel Zacharczuk (Honeycut, The Varnish) features interpretations of classics, of course, and the roster of bartenders is comprised of the best in the L.A. cocktail community, hailing from Harvard & Stone, The Tasting Kitchen, and Cana. And yet that’s not the only thing that will get discerning drinkers on the stools, for there’s also the decadent Scotch oyster luge.

That’s right. Forget about oyster shooters, which are basically vodka, cocktail sauce, and oyster in a glass. The Scotch oyster luge was created by Bowmore Scotch ambassador Johnnie “The Scott” Mundell to introduce new Scotch drinkers to the wonders of the brown spirit, and the team at Tipple & Brine adopted it to showcase their oysters and bar program.

The result is a creation that will win over those averse to the peatiest malt and the briniest oyster. “The oyster brings out this minerality and richness in the Scotch, which brings out vegetative notes in the oyster,” explained Tipple & Brine’s director of operations, Adam Weisblatt.

(1) “Take a sip of the brine in the oyster. It salts your palate and really starts to elevate your sense of taste.”

(2) “You start to salivate since it’s so salty and it prepares you for your first sip of Scotch. Get a small sip. And that will be enhanced because your mouth is super salted and all the flavors are magnified.”

(3) “Take a toothpick and eat the oyster, but leave the remaining brine. It cools that initial burn from that first sip of whiskey.”

4) “Pour the remaining half ounce of Scotch into the shell, where it mixes with the brine. Then drink it directly from the shell. It’s super minerally, salty, briney, really aromatic. They just work together amazingly.”

The restaurant uses Bowmore Scotch for the luge, as Islay is known for being slightly briney already. “Bowmore is gentle, and not overly smokey, like Laphroiag or Lagavulin,” says Weisblatt.

So what are the best oysters for this elegant exercise?

“East Coast/Atlantic oysters have been the best, because they have a high brine content,” he explains. “When you crack them there’s more liquid there, and it’s saltier.” Here’s a few oysters to be on the lookout for:

Wellfleet: These babies from the arm of Cape Cod are known for being particularly briney, but also super clear. “With Wellfleet you have this really clean, salty brine and when you add it to the Scotch, it spreads the flavor.”

Misty Points: From marshland in Virginia, these oysters possess vegetative, celery notes thanks to the rich water. “Something about that intense minerality and that slight vegetativeness went well with the Bowmore 15-year. It was insane.”

Kumamoto: These small, sweet oysters were used during the restaurant training with a half ounce of Scotch: “They’re one of the smallest variety of oysters and very deep-shelled. There’s not a ton of liquid so we were doing mini shots with some of the younger oysters and the Bowmore 8-year.”

If your mouth isn’t already watering, head over the hill after Monday and experience the Scotch oyster luge for yourself. You won’t be disappointed.