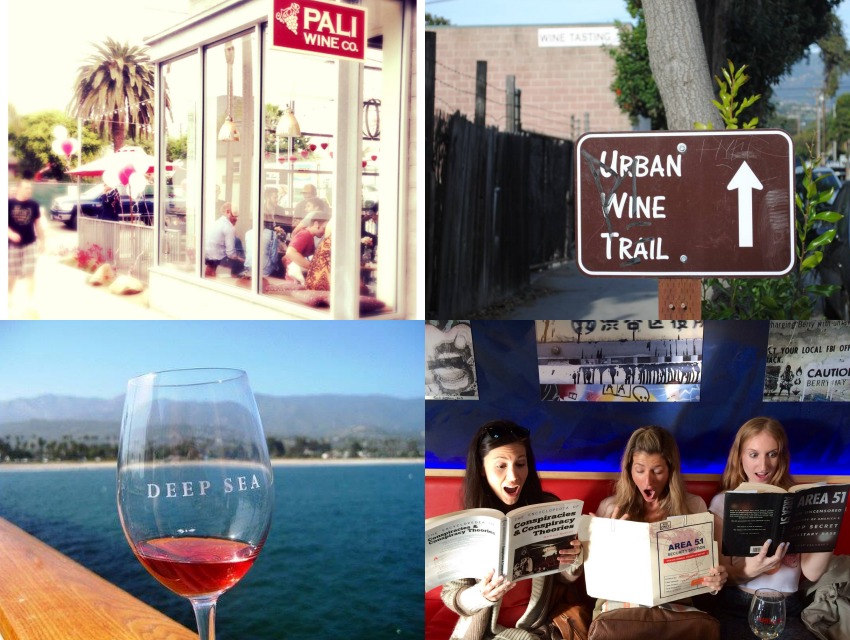 Pondering what to do with your 48-hours of freedom? Consider this: a wine tasting day trip to stain your teeth purple. This recurring column will guide you to some of the most exciting wine road trips around Southern California, complete with tips on what to drink, what to eat, and where to stay.

Game Plan:
Sandwiched between Highway 101 and the beach in Santa Barbara is the burgeoning and ever-expanding “Funk Zone,” a tightly-knit cluster of winery tasting rooms, art galleries, restaurants, and local shops centered around an alley that doubles as a concert venue. Get up early to beat the rush of beach-goers, so that you have time to pick and choose between the roughly 30 tasting rooms within the Funk Zone and along Santa Barbara’s Urban Wine Trail, which extends south and east along State Street, beyond Anacapa and Yanonali streets—the epicenter of Funk.

The wines you’ll taste are primarily from boutique producers who own vineyards or source fruit from Santa Maria Valley or the Santa Rita Hills, as well as other Santa Barbara County and Central Coast winegrowing regions—and they do not disappoint. Varietal Chardonnay and Pinot Noir wines reign supreme while others like Chenin Blanc, Roussanne, Marsanne, Viognier Grenache Blanc, and Syrah wines offer great bets as well.

On weekend afternoons the tasting rooms are jammed with a bustling, young, attractive and sun-kissed crowd. If planning a quiet romantic getaway, aim for a weekday retreat to avoid the throngs when you’ll enjoy a more intimate tasting experience with staff eager to talk about wine and answers questions.

You might make the Deep Sea tasting room your first (or last) stop. This hidden gem is situated on the south side of the Pier in an upstairs nook and has patio seating, for pristine blue water gazing. The name refers to the estate vineyards, planted on ancient sea-beds that lie close to the Pacific Ocean where the grapes enjoy long, cooler ripening seasons—prime for acid retention. Owned by the Conway Family, wines from Deep Sea, Conway Family Wines, and Arroyo Grande Wines are available to taste in four different flight options: Introductory ($10), Reserve Tasting ($20), White Tasting ($10) and Red Tasting ($20)—all flights include a taste of five wines, but the Red Tasting offers six. Favorites included: 2013 Deep Sea Grenache Blanc, Central Coast, 2011 Deep Sea Pinot Noir, Santa Barabara Country, and the 2009 Conway Chardonnay, Bein Nacido.

Whenever you hit the heart of the funk zone, hit a couple tastings before seeking out Les Marchands Wine Bar & Merchant (behind the Figueroa Brewing Company and Cutler Artisan Spirits). This elegant, high-ceilinged wine bar feels like an upscale country Parisian bistro and sports a divine selection of Eurocentric and Central Coast all-star wines curated by Eric Railsback and Master Sommelier Brian McClintic (star of the movie SOMM). Snag a seat indoors, or out in their courtyard and unleash your inner geek—the staff is incredibly informed and knowledgeable and love to talk and teach you about the wines you’re drinking. Wines by the glass range from $8 to $25 and there’s a small menu of share plates. Order the white bean crostini ($7) and a French rosé or Central Coast Chardonnay. If you get comfortable, they’ll let you know open any wine you buy on the retail side for a $20 corkage fee. Ask about their winemaker dinners.

Winery Spotlight: Area 5.1
While Area 5.1 “Mission Commander” Chad Nassif (who works the tasting room and manages the wine club) hopes to remain under the radar and “totally classified” the fact is, this Area 51-inspired tasting bar is a hot spot of fun, funky activity, with a friendly social crowd eager for close encounters of the wine kind. Brothers and co-owners Martin and Mike Brown thought up the idea when they finally received their green cards and decided to make light of being dubbed “resident aliens.” With Martin’s birthday falling on 5/1 and Mike leading a team of five winemakers, sourcing fruit from five AVA’s around Santa Barbara County, the “Area 51” and “UFO” motif seemed a perfect, fun and edgy approach. Wines have names like “White Light” and “Close Encounter,” while the tasting room staff is referred to as the “Flight squadron,” and conspiracy-theory-inspired art fills the walls—there’s one collage featuring JFK in a spacesuit.

Typically 5-6 wines, a mix of reds and whites, are offered at $10 a flight, or by the glass at $8 for whites and $10 for reds (there’s a TV for taking in a sports game too). Seasonal summer blends tend to be bright and crisp, while winter cuvées are more full bodied. Nearby, Lucky Penny delivers artisan pizza while Mony’s Mexican Food brings the tacos. The space is fairly intimate with capacity maxing out at…you guess it: 51.

Tasting Etiquette Tip: Sniff before you sip
Don’t be afraid to swirl that wine around in your glass and stick your nose in deep, before swirling in your mouth. The aromatics of a wine offer key indicators of what you’re about to taste—like fruit character (bright v.s. dense) and oak treatment (new or used oak v.s. stainless steel).

Where to Eat:
If Les Marchands isn’t serving dinner, or hosting a winemaker multi-course wine and food pairing extravaganza, start off with a bottle there, and finish it over dinner at The Lark (the staff at Les Marchands will walk your wine over for you). The menu is comprised of dishes from local and “responsibly grown” and seasonal ingredients. Start with a snack, like Deviled Eggs topped with crispy pancetta, jalapeno, smoked paprika and chive ($5) and Crispy Brussels Sprouts prepared with medjool dates, garum, sesame, and lime ($10 gets you a generous mound), the sharen a half-portion of Mary’s Roasted Chicken, a succulent, juicy and flavorful platter served with brown-butter smashed Yukon potatoes, smoked onions, bacon, and pea tendrils, all soaking in a Texas BBQ jus ($27).

Where to Spend the Night:
The romantic getaway: The Harbor View Inn, a four-diamond luxury boutique hotel, with splendid rooms and spacious marbled bathrooms, is situated at the corner of Cabrillo Blvd and State Street, a prime spot with uninhibited views of the ocean and mountains. From here you have direct access to The Funk Zone, which is just a five-minute walk from your hotel room and the Pier is directly across the street. If celebrating a special occasion (really, any occasion), ask for a room with a terrace and take in the sun set while sipping on a bottle you bought on your wine tasting excursions. (Hint: there’s a cozy and secluded hot-tub nook in the rear of the Spa, available to anyone staying at the hotel, regardless if you sign up for a treatment). Rates range from $325.00 – $650.00 during peak season (Memorial Day through Labor Day) and select weekends. Low season rates can range from $230.00 – $425.00.

Great location, won’t break the bank: Only a 10-15 minute walk from the Funk Zone, and directly off State Street between West Cota and West Haley Streets is the charming Hotel Santa Barbara. Around since the 1870s, an early celeb-hangout, the place fell into decline post-World War II, but was completely renovated in the 1990’s and the rooms continue to offer a comfortable atmosphere. Nightly rates range from $169 to $249 in the fall/winter and $179 to $339 during the spring/summer.