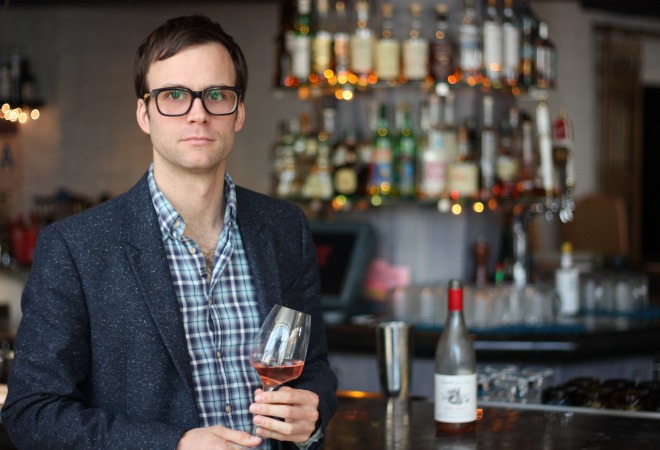 POT, Roy Choi’s restaurant-bar-café combo inside The Line Hotel in Koreatown, has no shortage of exciting offerings. Where else can you find kimchi soju cocktails, steaming pots of seafood stew, and sweet custard-filled buns in one spot?

One aspect that has gone overlooked thus far: The super-intriguing yet surprisingly affordable wine list created by Hayden Felice, the food and beverage general manager at The Line Hotel. Felice moved to Los Angeles from New York less than a year ago armed with some serious wine chops, having served as a general manager and wine director for Tom Colicchio’s Craft Restaurant Group.

So how did he go about creating a wine list that pairs well with Korean cuisine, especially food that is as boldly-flavored as Roy Choi’s?

“I love food-friendly wines to begin with, but I wanted wines that were balanced on their own,” says Felice. “I aimed for wines that had great acidity, a little bit of sweetness, and were lower in alcohol.”

Felice admits there wasn’t much of a precedent to pairing Old World wines with traditional Korean dishes. “In New York, some people in the wine crowd would hold B.Y.O.B. dinners at Sichuan restaurants, which always provided an interesting challenge,” he says. “I tried to use some of that same logic. Both cuisines have heavy spiciness and savoriness, but use fermented and pickled flavors too.”

As to the wine’s lower-price point (the most expensive glass, besides Champagne, rings in at $16), Felice credits Roy Choi’s emphasis on making the restaurant cost accessible. “Roy definitely stresses value, which motivated me to find some interesting bottles that were sort of underrated or overlooked. If I was getting off of work, these are wines that I would totally drink in my free time.”

The list is full of great selections for both wine geeks and novices. We compiled a few of our favorites below, along with comments from Felice.

➻ White: 1994 Schloss Schönborn Hochheim Dom de Chaney Riesling Spätlese Gold Kapsule ($16/$72)
“We have three really different Rieslings on the list. It’s like a small study of Riesling. This one is more on the off-dry side, but I hesitate to call it sweet. It comes from one of the oldest continually operating vineyards in Europe, which has been around for 26 generations or so. Offering a wine with 20 years of age for $16 is pretty fun too.”
Pair with: Beep-Beep Uni Dynamite Bowl

➻ Red: 2012 Kuni Wines “Pape Star”, Rhône blend, Paso Robles ($13/$52)
“One of the perks of being in California is you get to serve some fantastic wines while also staying local. This one is from a great vineyard in Paso Robles that practices the old-school ways of California winemaking. It’s full, enveloping and ripe, without tasting overripe. It has just the right amount of sweet spice.”
Pair with: BBQ Galbi

➻ Rosé: 2012 Bone-Jolly Edmunds, Gamay Noir, El Dorado County ($12/$48)
“You don’t see a lot of Gamay grapes made into rosé, especially in the states. The guy who makes this is a really humble, under-the-radar dude who grows on these gnarly old vines. It’s a very elegant, beautiful wine that expresses some of those traditional Gamay flavors.”
Pair with: Kush Salad