Home Uncategorized Why We Can’t Have Nice Things: L.A.’s Most Coveted Cocktail Glasses 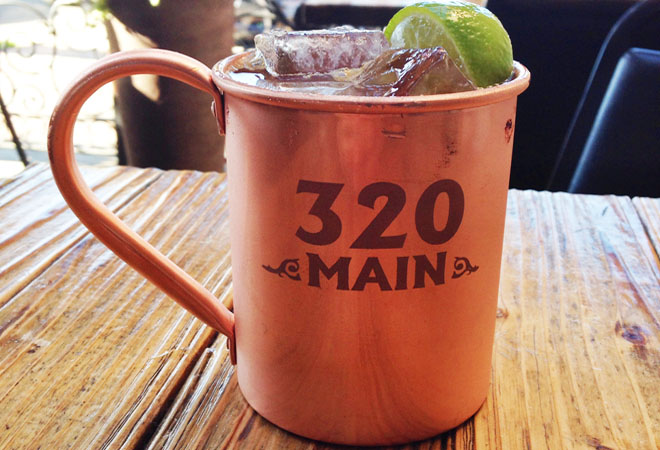 You’ve seen them, those cool copper mugs that Moscow Mules are served in at only the most savvy of bars. A little known fact: They started out as a marketing ploy when the drink was invented in 1941. Nowadays, they’re a signal to the drinker that a bar is serious about their Mule. Unsurprisingly, the best cocktail bars around town keep them in stock. Or at least try to.

As a December Wall Street Journal article brought to light, these eye-catching mugs unfortunately have a tendency to walk off on their own. It’s silly considering they’re readily available at stores like Crate & Barrel. And Cocktail Kingdom has a beautiful reproduction of a vintage version.

The good news is that this nationwide problem hasn’t deterred L.A. bars from continuing to serve cocktails in those mugs, or other beautiful glassware. But it has caused them to reevaluate their serving practices and to take precautions. Here’s what top bars in town are doing to keep their barware from walking.

320 Main: “A couple of years ago we decided to start buying our own mugs from a wholesaler and selling those mugs in house to our guests. Since then the number of stolen mugs has decreased significantly. We also added a $2 discount on Moscow Mules when you bring your purchased mug in with you and $5 off during happy hour. So the mug pays itself off in a short amount of time. It’s a win-win situation I believe. The mugs we use in house are blank and the ones we sell to our guests are branded with the 320 Main logo. Once in a while someone tries to come in with a stolen mug (saying they purchased it from us) and tries to get a discounted drink, but we snatch it back because ‘their’ mug has no logo.” – Jason Schiffer, owner

Cliff’s Edge: “I think we started with 24 and went down to like 15 in the first couple weeks, so now we only serve in them at the bar!” – Vartan Abgaryan, chef

Cole’s: “We use to go through 12 to 20 a week, until we started collecting IDs for them. Now maybe one to two a month get taken.” – Jeff Marino, general manager

Crossroads: “Since we started using them six months ago, I’ve lost maybe five or six. Veg-heads are good people. I make sure the servers are watching carefully.” – Jeremy Lake, bar program director

Ink: “There’s not much you can do except to add the charge to the guests’ check. Our waitstaff have been told if they see a cup missing off the table to add it on. I think we have similar issues with silverware rests and purse hooks as well as menus.” – Gabriella Mlynarczyk, bartender

Son of a Gun: “We did [have copper mugs] at Son of a Gun until 29 out of 30 were stolen! You need tracking beacons on those things.” – Daniel Warrilow, former Son of a Gun general manager

And it hasn’t just been the copper mugs that devious drinkers covet.

Picca’s vintage glassware:  “Picca started with all vintage glassware from Joe Keeper, including gold leaf mushroom collins glasses from the ‘70s. Within a short time most of the glasses had been stolen. Management had to speak to servers about how to kindly approach customers to pull our glasses out of their purses during our first few weeks of pre-shifts. Within a few weeks we had to stock Libbey glasses.” – Julian Cox, mixologist

Seven Grand’s Julep Glass: “Our system is based on holding a credit card and charging for any cups not returned. Each cup is worth $25 and we also occasionally sell them for that amount up front after someone asks right away if they can keep them. Holding the cards has kept the theft of them next to zero, because the cost is so high.” – Andrew Abrahamson, general manager

Cana Rum Bar’s Tiki mugs: “We stopped serving a lot of our drinks in Tiki Mugs (you may remember our adorable tiki shot glasses that we had upon opening — those did not last long) often. We limit it to one cocktail per menu in a Tiki Mug so that we can keep an eye on them. But at the end of the day, it’s not exactly tactful to ask someone to open their purse unless you physically saw them put it in there. And with that, theft is somewhat a cost of business. We at Caña don’t really do anything to deter theft except give people as friendly and familial experience as we can. Maybe they will feel guilty stealing from the nice bartender and think twice before they do so.” – Danielle Crouch, bar manager

Ten Pound’s Lalique crystal tumbler: OK, no one has dared try and pocket these hefty $325 crystal tumblers because with only two bartenders working the reservations-only bar and the exit a long way down past Scarpetta and through the Montage, that would be pretty dumb. Besides the clientele here would never attempt anything so gauche. But by golly are those glasses beautiful and perfectly fit the Scottish Highland water ice ball. Swoon.