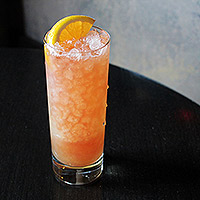 “Who would think to put an Alabama Slammer on a cocktail list? “ asked Richard DiSisto, owner of the new Tunnel Bar in Sherman Oaks. Maybe back in the ‘70s and ‘80s when those drinks were popular, but in this age of craft cocktails, farm-to-glass programs, and cocktail consultants? Yeah, no. And yet, that’s exactly what Tunnel Bar director of operations Adam Weisblatt and head barman Daniel Zacharczuk did. “This whole development came from not doing what was right but what just sounded fun,” said Weisblatt.

For Tunnel Bar, DiSisto’s upscale cocktail lounge located over his month-old restaurant Tipple & Brine, the bartenders wanted to not only create original drinks but crafted versions of, let’s face it, not-good cocktails. “The Alabama Slammer? That’s MY generation and you made it like this: [pantomimes pouring two bottles of booze into a shaker] ‘Slammer!’” said DiSisto, who in a former life was a bartender back in New York. “We just had lines of glassware because people would order a Bay Breeze, a Sea Breeze, a Madras, an Alabama Slammer, a Long Island Iced Tea. It was all the same drink and nobody cared.”

But now that people do care, Weisblatt and Zacharczuk wanted to upgrade these club classics. “We want to go in and bring some of these lost club drinks back by using really good ingredients and, of course, technique which is one of the huge parts of it,” said Weisblatt.

They make their own “SoCo” for the Slammer with bonded bourbon, Velvet Falernum and peach liqueur. For the Hurricane, they use French passionfruit puree instead of cheap liqueur; for the Stinger they use Tempus Fugit Crème de Menthe Glaciale in the place of that syrupy toothpaste-y green stuff. Plus the skilled bartenders here are big on actually measuring ingredients. The results are a bit disorienting, but in a good way. Think: watching the original Star Wars but with modern special effects, or Knight Rider but with KITT played by a Porsche 911 GT3.

It’s all an appropriate complement to a bar inspired by 1970s NYC glam rock hot spot, Max’s Kansas City. Tunnel Bar has that other-era vibe with its rockstar portraits decorating the walls, a Gotham subway tunnel-like arch over the bar, and 1980s quilted rose-pink leather seating. But instead of being gritty and packed in, it’s all cleaned up with an intimate 50-person capacity, and there’s a dress code (no flipflops or sportswear).

Tunnel Bar opens to the public on Thursday. The entrance is in the alley behind Tipple & Brine.