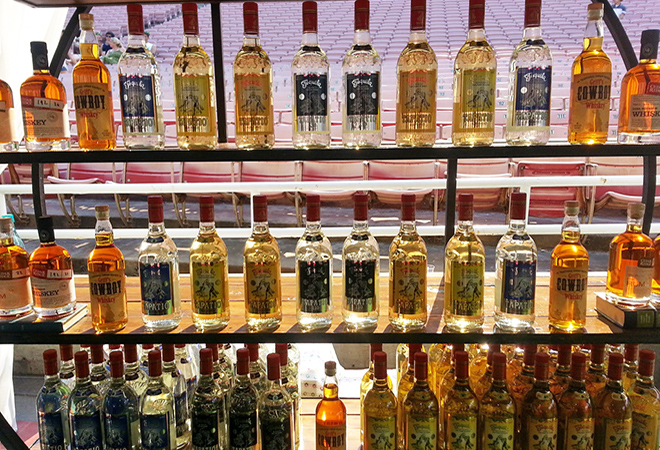 Heads up, this year’s cocktail participants at L.A. Street Food Fest’s Summer Tasting Event in the Rose Bowl are going to be stellar. It’s just the thing to quench your thirst after noshing on the best of what the L.A. street food scene has to offer. How do I know? I picked the bars myself. For the second year in a row the LASFF organizers tasked me with curating the cocktail bar selections at the annual summer food fest. And to make sure they’re up to the standards of your discerning palates, I did a lot of research and many grueling tasting sessions. Ahem, many.

But I’ve narrowed it down to some of the best cocktail hotspots which will fit in with the summery festival nicely: 1886, Harlowe, and Petty Cash. Here’s what they’ll be serving up. (Church Key and Melrose Umbrella Co. will be there, too, but are keeping their cocktail deets up their sleeves.)

During the festival’s VIP session, new West Hollywood bar Harlowe will serve up a bottled cocktail, a “fun carbonated tequila beverage.” Afterwards for general admission they’ll have their “Captain Planet,” a cocktail on the current menu made with Bols Genever, house-made spiced watermelon strawberry shrub, lemon juice, and “effervescence”.

Petty Cash is bringing the perfect thirst quencher for the hot day: Petty Cash Margarita made with Ocho Tequila and kegs of its Brixton cocktail which at the restaurant is made with gin, poblano sorbet, habanero, lime, and flaming Green Chartreuse on top. But I wonder how they’ll replicate that flaming chartreuse.

Pasadena’s own 1886 will have the Queen’s Park Swizzle, a refreshing rum cocktail that’s similar to a Mojito with rum, lime, simple syrup, mint and Angostura bitters.

If craft cocktails aren’t your jam, the Tequila Tasting Tent returns to the Bowl and there will also be beer from local breweries Angel City and Golden Road as well as Stella Artois, Kronenbourg, and Singha.

For coffee lovers, the summer event debuts a new Iced Coffee Lounge featuring frosty brews from the likes of Cognoscenti Coffee, Copa Vida, plus the debut of Angels Gate Roasting from San Pedro.