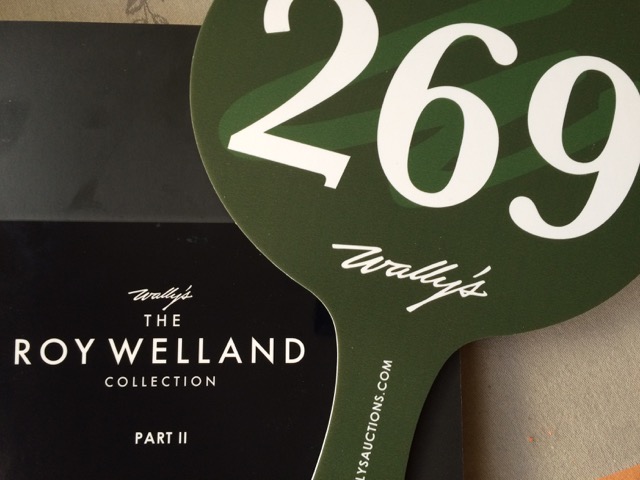 Wally’s Wine Auction service is barely a year old, but over the weekend the new company made a huge splash locally by bringing an exceptional group of wines to Los Angeles, the Roy Welland Collection.

In the last few years, the domestic wine auction scene has been a shadow of its former presence, rocked first by the severe recessionary conditions of the mid- to late- 00s, and further tarnished by the mind-boggling fraud activity of local collector-now-felon Rudy Kurniawan. Into this void stepped Christian Navarro and his new partners at Wally’s, Paul and Maurice Marciano. They’ve made a play for control of the wine auction market country wide, hiring a seasoned operations staff and luring Michael Jessen, a veteran of the auction business, away from Zachys as their CEO.

Wally’s ambitions are aided by a cache of wines like the Welland Collection. A former Wall Street options trader (and contract bridge champion), Welland became one of the country’s most passionate collectors, purchasing more than 150,000 bottles in the late 90s and early 00s, eventually partnering with a New York restaurant, Cru, to facilitate selling the ones he didn’t want to drink. (Cru closed in 2010.) In September, Wally’s offered half the collection in New York. The rest was sold here this past weekend.

In all 3,400 lots were sold, of precious French, German, Italian and American wines, though by far the most treasured bottles in the sale came from Burgundy. Welland loved and amassed Burgundy like few other living Americans, legendary pinot noirs and chardonnays like Coche-Dury, Lafon, Ramonet, Ponsot, Domaine de la Romanée-Conti and others. This was a collection famous for its breadth, its depth, its provenance, and its condition, and it proved to be irresistible to buyers all over the world who attended, tuned in, or followed the proceedings gavel to gavel on Friday night and Saturday morning at the SLS Hotel in Beverly Hills.

By late Monday night Wally’s had compiled the results of the sale: over two days, 1600 auction lots were sold, nearly 100%, generating sales $5,568,048, and exceeding even the most optimistic estimates. By any measure, their first L.A. effort was a staggering success. In all, through both sales, the collection raised a whopping $12,166,836, over $1 million more than the highest expected bids.

So who was buying? The room was filled with well-heeled local collectors, but also with New York buyers; in addition a nearby phone bank was fielding calls from several off-site bidders, many, it seemed, from China.

That this was happening in Los Angeles amounted to a modest seismic shift in this rarefied wine auction world. “It’s a nod to the sophistication and importance of Los Angeles and indeed all West Coast wine collectors,” says Ursula Hermacinski, the evening’s principal auctioneer and an advisor for Wally’s’ new endeavor. “We are already talking about what we can bring to the next LA auction.” – Patrick Comiskey