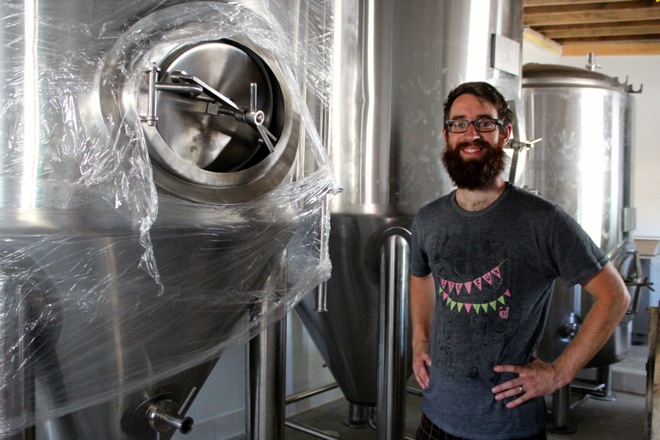 While we mourned the surprise closing of Pasadena’s Haven Gastropub + Brewery last week, we can take solace in the fact that new Los Angeles area craft breweries are opening up, and frankly, we couldn’t be more excited.

Pac City Brewery
Please welcome Pacoima to the craft beer map! Pac City Brewery opened in late April with a rotating list of beers in their repertoire, and there are plans to launch a “Heritage Line” in the fall that will honor and represent the brewery owners’ Mexican heritage while celebrating locally grown ingredients.

Great way to try their beers: The brewery is hosting a tasting event this Saturday from 6:30 to 9:30 p.m., with a portion of the proceeds going toward local no-kill animal adoption coalition NKLA and the LAPD. Tickets and more info.

Highland Park Brewery
Tucked in a back room at the Hermosillo on York Blvd. sits a shiny new brewhouse and fermenter tanks that are finally filled with brewmaster Bob Kunz’s delicious beers. Kunz is a familiar face to many, having worked at both Father’s Office locations during his six-year employ with them, and he’s got chops from years of home-brewing as well as professional experience from his time at Pasadena’s veteran Craftsman Brewing Company.

Great way to try their beers: They’re still maturing in tanks for the time being, but Highland Park Brewery’s beers will be available on tap and for growler fills at the Hermosillo in the coming weeks. On deck: Lazy Susan, a tart, refreshing Berliner Weisse-style beer made with peaches and nectarines from Masumoto Farms, and Good Guava, a bright Belgian-style saison brewed with wheat and “estate guavas” picked right from the parking lot.

MacLeod Ale Brewing Co.
Not far from the gigantic Anheuser-Busch brewery in Van Nuys, an exponentially smaller brewing experiment is set to open on June 22: MacLeod Ale Brewing Co. Head brewer Andy Black has a penchant for brewing traditional British and Scottish beer styles, and—along with business owners Jennifer and Alastair Boase—will be serving them all from traditional casks. Cask ale is different from kegged beer in that it’s conditioned and allowed to ferment in the cask, remaining unfiltered and unpasteurized, with a softer carbonation level than most commercial beer. (The tight, silky head on proper cask ale derives solely from the yeast fermentation; no carbonation is added.)

Great way to try their beer: Kegs and casks will be headed to beer bars and restaurants around the city, but there may be no better place to enjoy it than at the brewery. Pours there will be served at cellar temperature—a warmer, more continental 55°F rather than the usual American 35-40°F. But make no mistake: this is not warm beer. It’s still plenty chilled and the slightly warmer temperature allows the drinker’s palate to better appreciate this style of beer. (We highly recommend trying the wonderfully smooth and deceptively simple Extra-Ordinary ESB.)

Later in the year…

Phantom Carriage—which had been brewing out of Torrance’s Monkish Brewing Co.—signed a lease on a property in Carson back in November 2013. A recent post on Twitter answered their most frequently asked question: they hope to open “late summer ‘14.”

Brouwerij West snagged up a space at the Port of Los Angeles in San Pedro last year after three years of contract brewing its beer out of other locations. Its own 27,000 sq. ft. “brewery, tasting room, and full-service restaurant plus patio dining area” will be opening in the newly expanded CRAFTED marketplace. The sign outside reads that they’re opening this summer, but the San Pedro Beacon reports that construction isn’t slated to start until September, and they’re hoping to have the brewery open in “late 2014.” On the food side, Brendan Collins (Waterloo & City, Larry’s) has signed on as head chef.

Work continues on the Eagle Rock Brewery Public House (in the former Fatty’s space) and the Venice outpost of Firestone Walker Brewing Co., but no dates are set for their openings.