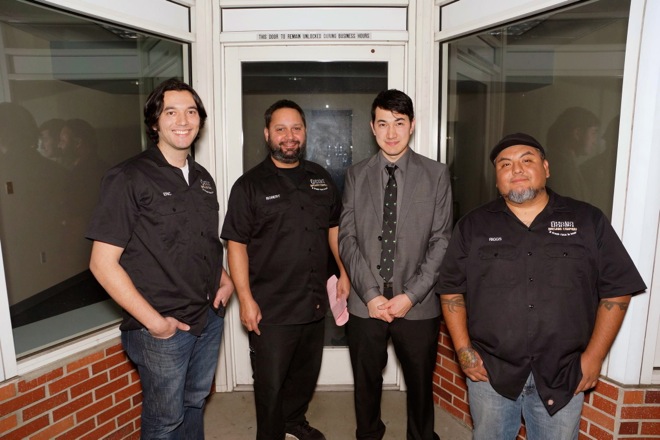 Plans for Ohana Brewing Company’s taproom have been given the green light by the City of Alhambra Planning Commission. Ohana’s main brewing facility has been in operation in South Los Angeles since August 2012, but one thing they didn’t have was a public tasting room. Now, in a matter of what owner Andrew Luthi hopes to be four to eight weeks, that’s going to change.

The 870 sq. ft. space will be tucked right behind the popular Alhambra craft beer mecca, 38 Degrees Ale House & Grill, and will serve as a sort of brewery outpost where thirsty patrons can sample Ohana beers, take home refillable growlers, and buy merchandise.

“We hope to have four to six taps starting out,” says Luthi, “and maybe we’ll be able to add more after we get an idea for what kind of business we do there.” Luthi chose Alhambra for his taproom location not only because that’s where he’s lived most of his 25-year-old life, but also because he found Alhambra to be more welcoming than the City of Los Angeles. “The city [of Alhambra] has been very supportive, and a lot more friendly about our taproom. We’re still hoping to have a taproom at our main facility someday, but it will involve some build-out and additional permitting,” he explains, adding that there’s no immediate plans or definitive timeframe for that project.

“The entire Ohana family has been coming to 38 Degrees regularly since we opened our doors in June 2009,” reports Clay Harding, owner of 38 Degrees. “We were very excited to hear that we were going to be neighbors.”

The conditional use permit for the taproom will initially limit guests to sampling four 4-ounce tasters, but Luthi expects that in time, they’ll be able to petition the city for an increased allowance.

“They have worked so hard to develop this project,” continues Harding, “and I think it’s awesome to bring it home to Alhambra. Six years ago, folks told me craft beer wouldn’t fly in Alhambra, but I called the bluff and I can now say that Alhambra residents are badass, craft beer lovin mofos! I would love to see more breweries around town.”

As for what else is on the horizon for Ohana Brewing, Luthi shared that they’re just about to release Black Rhino, a black double IPA that’s part of a trilogy of beers made in homage to local craft beer writer Alex “Rhino” Rebollo*, and Saison Brett, a version of their Saison Soto that’s been aged for around four months with a special variety of yeast call Brettanomyces. (A sour Flanders red ale is also in the works, but don’t expect to see that for around eight or nine months.)

* “Rhino” is currently in the hospital recovering from some serious health setbacks. Please join me, and the rest of the Los Angeles craft beer community, in wishing him all the best! The good news is: he’s definitely a fighter! Cheers to you, brother!