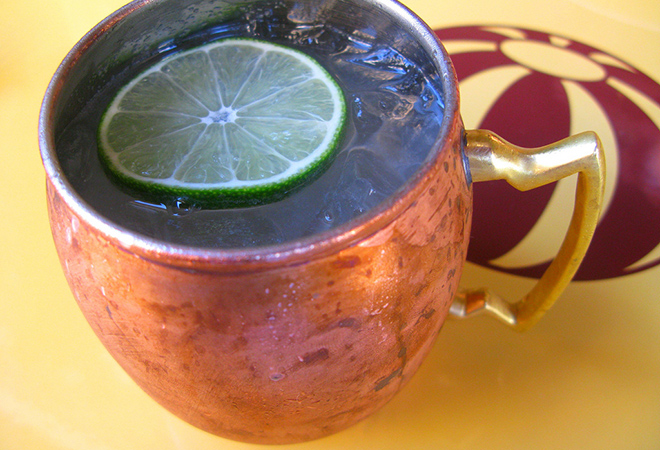 As a cocktail enthusiast, you’ve probably frequented enough bars and picked up enough bar stool knowledge to consider yourself a pretty good authority on the craft. You can tell your less informed friends that “good tequila won’t give you a hangover” is a lie or that Manhattans should never ever be shaken. But even the experts sometimes have misconceptions. Get ready to have your mind blown by these bar myths busted by some of L.A.’s top bartenders.* I know mine was! I’m still feeling betrayed about that flaming peel thing.

Myth: Moscow Mules are served in copper mugs for the flavor.
Busted by The Corner Door’s Beau Du Bois: “This couldn’t be further from the truth. I don’t think the health department would be cool with copper-infused cocktails. Moscow Mule/vodka makers used a copper mug as a marketing ploy in the ‘40s to make the drink more eye-catching and popular. It is true that copper cutlery is used in food service. Tasting the bitter metal as you take a bite, using a copper spoon will add some flavor but it wouldn’t change a cocktail’s flavor, especially one that so many drink from a straw.”

Myth: Flaming the peel caramelizes the oil and enhances the cocktail’s flavor.
Busted by Sadie’s Giovanni Martinez: “We flame the citrus peel because it looks cool, any other reason you hear is myth. But that’s a part of bartending: showmanship. Why else would we do it? It’s a valid addition in that sense. Not to mention, so many people use matches. So if by aroma you mean sulfur… Citrusy is good but it smells more citrusy to just spray the oils without burning them.”

Myth: Dry shaking egg whites properly emulsifies the ingredients.
Busted by The 86 Company’s Dushan Zaric: “Sorry to disagree with my mentor Gaz [Regan] on this. There’s no scientific proof whatsoever that the dry shake [with no ice added] will make a better egg white cocktail. The dry shake was invented by Chad Solomon who is a friend of mine. He used to be my bartender at Schiller’s Liquor Bar in New York in 2003. He had problems with his back. And if you use the Boston Shaker with Kold Draft ice for a long time it’s a pretty heavy thing. At the end of the day it doesn’t improve the drink at all. Actually what happens when you dry shake is your seal is about to break because the shaker is designed in such a way that only when you shake with ice the seal will hold.”

Myth: Shaking drinks with “premium” ice matters.
Busted by Mixology Master Method’s Joseph Brooke: “Ice quality, in terms of shaking a cocktail, the differences between Hoshizaki chip ice and hand-cut ice? Inconsequential. Obviously if you have a drink sitting out for three minutes, the chip ice will melt quicker than the cube and you won’t get that lovely texture to it with all the bubbles and such, but in terms of dilution and taste it’s almost the exact same thing.”

Myth: Shaking a martini bruises it.
Busted by Liquid Assets’ Marcos Tello: “Technically you can’t do this, however, if you are using vermouth in a cocktail it will ‘muddy’ the flavors that your vermouth imparts onto the finished drink. All the botanicals in the vermouth that you would normally taste if it was stirred kinda get ‘generalized’ when shaken.”

Myth: To properly make a Ramos Gin Fizz, you need to shake it for 12 minutes.
Busted by Liquid Assets’ Brent Falco: “Back in the day you probably did [have to shake it that long] for maybe the icem but later it was showmanship of what that cocktail became. It does always comes out beautifully when you do allow that to happen. But now we have the science and the proper ice, if you actually let it rest you can make that same cocktail.”

Myth: Tequila is a stimulant.
Busted by Bar Harlowe’s Kyle Ackley: “Although agave spirits can supply an ‘alternate high’ if you will, the fact remains that it still contains alcohol. Which, regardless of distillation methods, is still a depressant. It’s like saying an Irish coffee is purely a stimulant because the coffee has caffeine. But, it still has plenty of booze in it. Hence, depressant.”

Myth: Vodka made from potatoes is the only gluten-free spirit.
Busted by No Vacancy’s Nick Vitulli: “When you bring any distillate to 173 degrees Fahrenheit any and all remnants of gluten are completely eliminated. All straight spirits are gluten-free no matter what they’re made out of.”

*Of course there are still disagreements among the bar community about some of these. Like the flaming peel thing, The Eveleigh’s Dave Kupchinsky says, “Giovanni is full of shit and doesn’t know what he is talking about. It is completely overused and inappropriately used in most cases, but on certain drinks does make a difference. A subtle one, but a difference nevertheless.”