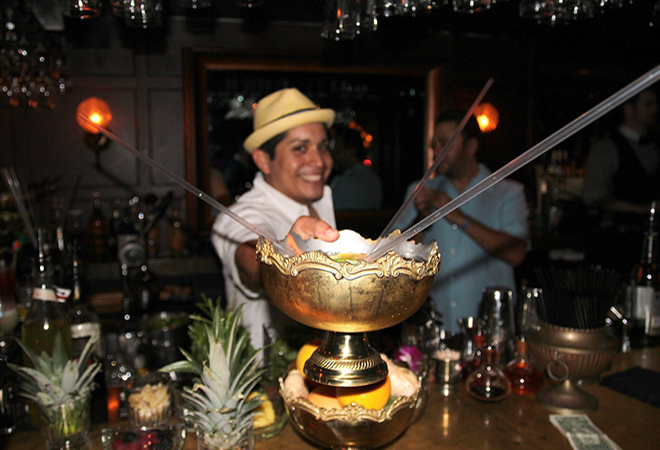 Industry night at The Spare Room

Forget happy hour. In L.A.’s tight cocktail community, it’s all about the bar industry nights. Since bartenders usually get the early part of the week off, that’s when bars celebrate the men and women of food and beverage with special guest bartenders, drink deals, or special events. Sometimes it’s a chance to get a drink made from a celebrated out-of-town bartender and other times it’s to R&D new cocktails. The best part is that in most cases you don’t even have to be a card-carrying bartender to partake. “Ours is open to the public, and I know many that are,” said Harlowe general manager Kyle Ackley. “We all kind of do ours in our own little way. Kind of fun to think about the options people have when they’re in the biz, or even just an enthusiast.”

Whether you’re coming out to hang with some of your favorite bartenders or drink on the cheap, here are some of the best bar industry nights around town that are open to the public.

Eveleigh’s guest bartender series: Mondays 7-11 p.m. This is when you can see bartenders turn into fawning fans. The weekly series showcases the best of the best drinkmakers from around the U.S. and L.A. In August, guest ‘tenders include Harvard and Stone’s Yael Vengroff as well as Pam Wiznitzer from the Dead Rabbit NYC, which won “Best American Cocktail Bar” and “World’s Best Drinks Selection” at this year’s Tales of the Cocktail Spirited Awards.

Honeycut’s “I Fucking Love This Industry”: Mondays all night, at what has become a bartender’s hangout/disco party. $1 Fernet minis and uber talented DJ/bartender Dave Fernie get you grooving on that fantastic multi-colored dancefloor.

SPiN’s Industry Night: First Monday of every month starting at 9 p.m. It’s free ping-pong and $5 drink specials all night long at this ping-pong entertainment venue in the Standard Downtown. You also get free membership which scores you discounted valet and a $50 hotel room.

Harlowe’s “Sport and Game”: Tuesdays starting at 10 p.m. Enjoy $5 late night bites, $3 High Lifes, $5 Dickel rye, and $10 R&D cocktails which may or may not make it on the menu. DJ Earchub (a.k.a. Matt Wise, the GM of Roger Room) mans the turntables.

Spare Room Hollywood’s “Evening of Tiki”: Wednesdays during the summer. There are only two more nights of this series left! Geek out on all things tiki with Paul McGee of “Best New American Cocktail Bar” Three Dots and a Dash in Chicago, and Steve Schneider of “World’s Best Cocktail Bar” Employees Only, who will be finishing up the series on August 13 and September 3, respectively.