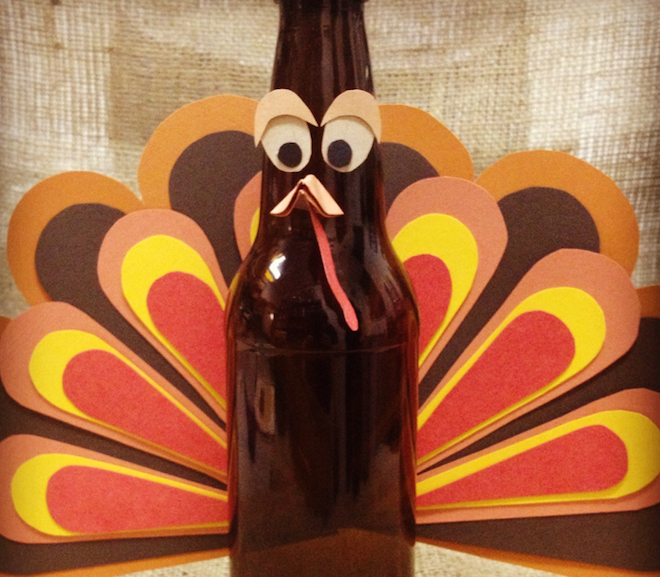 So you say you wanna bring some local craft beer to the Thanksgiving table? Good call. Stick with these recommendations and your taste buds are sure to be thankful. (Your guests’ taste buds too, I guess… if you feel like sharing.)

Saisons and bières de garde are my absolute favorite thing to have with Thanksgiving dinner. They’re immensely versatile, complementing many different kinds of comfort food extremely well. Balance is the name of the game with these beers, which were originally brewed to help keep seasonal farm workers hydrated, refreshed, and well nourished. They’re like the Goldilocks of beer: not too light, not too heavy, they’re just right. And the subtle peppery spice character that the yeast strain contributes is the secret that makes them so damn food friendly. Seriously, these will be good with just about any savory dish you’re cooking up.

If turkey is the centerpiece of your table, wheat beers are an excellent option to consider. Both German-style hefeweizens and Belgian-style witbiers are light and crisp with a good level of carbonation that helps make each bite taste like it’s your first. Traditional Bavarian hefeweizens tend to have flavors redolent of banana and clove that are imparted by the yeast strain, while Belgian-style witbiers are usually spiked with a touch of orange peel, coriander, and a peppery spice called grains of Paradise.

The toasty flavors present in amber and brown ales match quite well with anything smoked or roasted, be it turkey, ham, root vegetables, or otherwise.

India Pale Ales continue to be all the rage with craft breweries, and they’ve certainly taken the center stage here in L.A. While they’re delicious on their own, they certainly aren’t the most food-friendly beers and if the pairing is off, it can be a lot less forgiving. But, if you’re cooking a deep fried turkey, gamey meat (like lamb or duck), anything spicy, or something with an Asian flare, you very well could pull it off since the bitterness of the hops and the carbonation will help to cut through the heavier dishes.

Leaning toward the darker end of the beer spectrum, we find porters, which carry a lot of the same roasty, chocolaty flavors of stouts without being as thick or heavy. Porters are especially great with Thanksgiving meals coming out of the smoker—turkey, ham, brisket, lamb, duck, or mixed veggies—and I also happen to love them with the obligatory green bean casserole. On the dessert side, they totally shine alongside pumpkin or pecan pie.

Yes, it seems like these invariably need to get mentioned every year, which is why I assume breweries keep making them. Many are cloyingly sweet, chemically tasting from all the added spice extracts, and frankly, a little plebeian. Not to mention, pumpkin beers seem to be coming out earlier and earlier each year (who knew fall started in June?!) so some folks may already be worn out on ‘em.

That said, if you insist on having some pumpkin in your suds, who am I to stop you? Ichabod Ale from Alpine Beer Co. is quite tasty, but may be a little difficult to find. TAPS Fish House & Brewery in Brea makes a phenomenal pumpkin ale, but you’ve gotta stop in for a growler fill since they don’t bottle it. For something a little easier to locate, check out Autumn Maple from The Bruery. It’s not made with pumpkins, but it is chock full of yams (close enough) and it pairs well with all kinds of holiday fare: turkey, ham, or any kind of roasted vegetable dish. (Especially Brussels sprouts! Yes please!)

Just be careful not to eat and drink too much pumpkin. Bad things can happen: