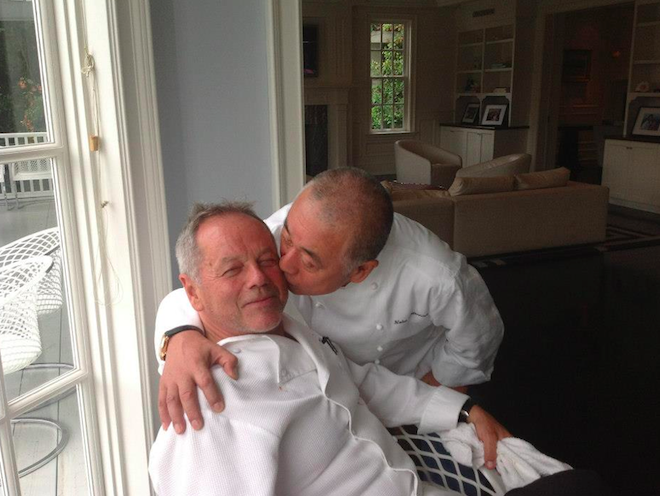 David Bernahl and Robert Weakly are the dapper team behind Los Angeles Food & Wine. Now in its third year, this spectacular event is gearing up to close off Grand Avenue downtown from Thursday, August 22 to Saturday, August 24.

“There is going to be a red carpet running down the street, right in front of Disney Hall and the new Broad museum,” Bernahl is talking in excited tones about his big plans for Los Angeles Food & Wine 2013. He’s gotten Chicago chef Grant Achetz (Alinea, Next) to come to town, along with Achetz’s mentor, Thomas Keller. Ziggy Marley and Ben Ford are going to cook on a stage together. If you’re lucky, you might catch chef Nobu Matsuhisa giving Wolfgang Puck a kiss on the cheek.

Bernahl and Weakly have also lined up Curtis Stone, Giada De Laurentiis, Masaharu Morimoto, Duff Goldman, Rick Bayless, and Scott Conant. No less than 200 wineries will be in town to pour their own wines for guests. Michael Chiarello is coming down from Napa, Gino Angelini is going to make pasta, Ori Menashe from Bestia will be there, Evan Funke will give out tastes of his soon-to-open Bucato, and Antonio Giordano will serve up some favorites from Terroni.

There will be tacos from a guy named Rick Bayless, who will be assisted by the very capable Ray Garcia (FIG). Sub-events, like the Asian Night Market—staffed by Bryant Ng (Spice Table), Kris Yenbamroong (Night + Market), David Myers and (Hinoki & The Bird)—will take place throughout the city.

“We’re expecting 20,000 people. There will be air-conditioning,” Bernahl notes. Since its first year, L.A. Food & Wine has sold out each year.

Downtown will be dancing to Gavin DeGraw and Ahmir “DJ ?uestlove” Thompson during the day and under the stars. So what are you waiting for? Tickets are on sale now.