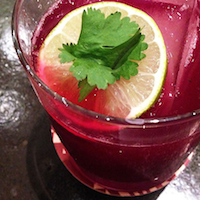 Let’s face it. Organic cocktails aren’t exactly photogenic. Since they don’t use ingredients with artificial colors, they’re usually brown. And not even an interesting brown, but rather, kombucha tea brown. But at new West Hollywood vegan Mexican restaurant Gracias Madre (from the same folks behind cult favorite Cafe Gratitude), which opens today, Beverage Director Jason Eisner found workarounds to make his organic, vegan agave-based cocktails a feast for the eyes as well as the palate.

Eisner infused tequila blanco with cacao for a rich, dark brown spirit to use in his agave twist on the Negroni, the “Mexoni.” He dressed up his Tequila Sunrise variation, La Conquistadora, with a float of tempranillo and edible flowers. And he’s not afraid to play with garnishes or whimsical, striped straws. “People think it’s strange for a guy with a shaved head and tattoos to make these drinks but I want them to look pretty,” Jason said.

But the drinks don’t just have their looks going for them. After 13 years of bartending—most recently at Drago Centro downtown, where he was trained by Jaymee Mandeville and took over the program late last year—you can bet he’s picked up a few skills. “I’d like to think I’m an amalgamation of my mentors,” says Eisner.

The 12 cocktails—six specialty cocktails, three Tommy’s Margarita-inspired cocktails, and three refreshing margaritas—are straightforward, food-friendly, crafty, and quick to make. And yet there are still some mixology tricks in there like carbonated cocktails, atomizers, and plenty of housemade infusions.

Jason’s cocktail list will be updated seasonally, keeping up with Executive Chef Chandra Gilbert’s menu. But here’s what you can have on opening day, today:

The good news for those who like their spirits straight up: Gracias Madre also offers tequila and mezcal flights, ranging in price from $19 to $23 for a flight of three. Perfect if you find the list of over 100 small-batch organic tequilas and mezcals overwhelming. The tequila flights are served with housemade sangrias while the mezcals come with a slice of orange or pineapple and housemade chili arbol smoked sea salt.