Home Drinking Wine So You Wanna Be a Somm? 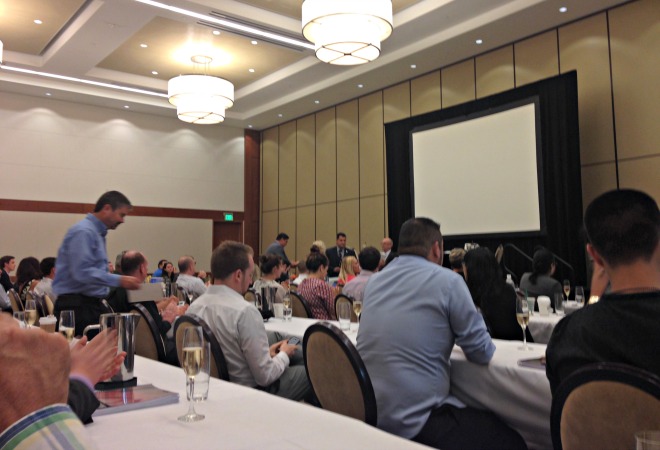 “I can’t smell anything.”

I stuck my nose deep into the bowl of the glass trying to pick up anything from the red wine. This was the blind tasting exercise for the Court of Master Sommeliers introductory exam, the first of four levels required to pass to become a Master Sommelier. I was one of four students picked to stand in front of the 88 students that weekend and guess the wine by scent. If you’ve seen last year’s documentary Somm about the grueling master sommelier exam, you know the kickass way this should be done. It’s the best parlor trick ever.

Of course since this was just the first level, this exercise was simply to acquaint us with the deductive tasting process. The master sommelier instructors don’t actually expect us to call out the correct wine. Still, it was pretty excruciating to attempt.

Fortunately, this was only a small portion of the two-day introductory course. The rest was the equivalent to “being fed from a firehose,” as master sommelier instructor Sally Mohr warned at the beginning of day one. What followed was a fast and furious run through all the basics of wine, from viticulture to the history and laws of wine-growing regions around the world (old and new world) to food and wine pairings, culminating in a 70-question multiple-choice test. Though the pass rate is 90 percent, with students only needing 60 percent correct answers to pass the exam, it all seemed overwhelming.

Back in February I was invited by the Court to take the exam as media to see what the program was like. In the months leading up to it I crammed as much as I could, researching benchmark wines (Wine 101), interviewing wine experts, tasting everything, and taking notes of every wine I drank. Nothing stuck. They say you should have a minimum of three years in the wine industry before you take it. I had zero.

After that first intense day of introduction, I decided to give the exam a try anyway. It would be interesting to see if a newbie like me could pass, I figured. I’ve heard stories of people walking into the class with no knowledge at all expecting to pass on what was learned just those days, and failing miserably. So I had no illusions. But as I finally sat before the test questions, a feeling of giddiness overcame me. “I can pass this!” Everything our instructors had pointed out during class was on the question sheet. I’m not allowed to specify what but they were basic wine facts like “What Australian region is known for this type of soil?”

In the end, only one person in the class of 88 didn’t pass, and surprisingly that person wasn’t me. I attribute my success not just to taking notes every time the master somm said, “Now, this is important because it’s going to be on the test” but actually not worrying about failing and enjoying the class. “Free yourself from the bondage of ego and learn,” said Jordan on the first day. “You can’t save your butt and your face at the same time.” He was right. Once I stopped freaking out, I was able to immerse myself in the lessons. And things stuck!

Here are some suggestions on how to pass. Keep in mind that I didn’t really do the first two but can tell you now with 20/20 hindsight that it will help lots:

If you’re considering taking the course, there’s going to be one in Downtown L.A. at DoubleTree by Hilton on August 5-7.