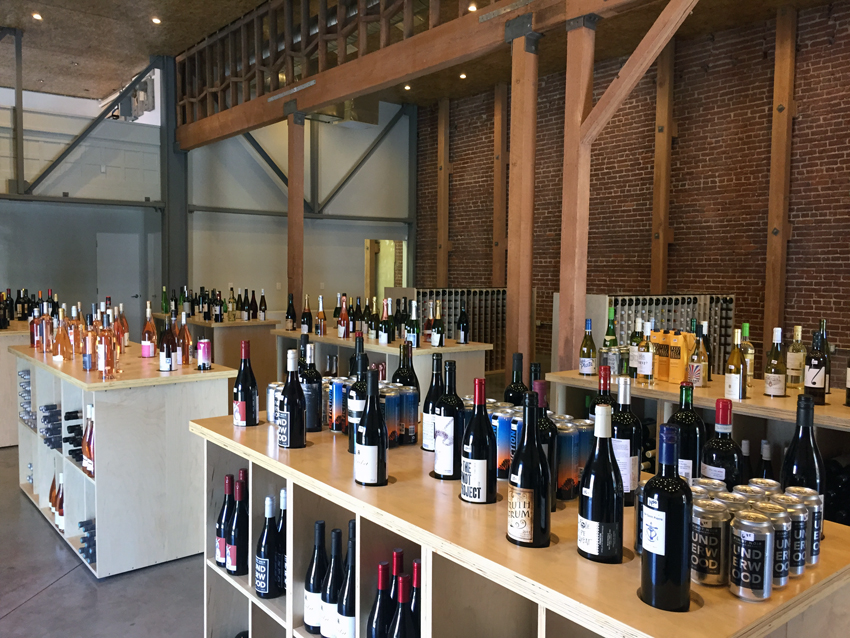 Silverlake Wine, an L.A. mainstay for over 10 years now, had been looking to expand into Downtown for a while. Co-owner Randy Clement says he drove around on his own, searching out “For Lease” signs and had developers taking him to available buildings long before settling on a location. When he found the new space on East 7th Street in the Arts District, he knew he’d found the right place.

“I’m not a metaphysical guy,” says Clement. “But it feels good in here.”

The new Silverlake Wine features the design essentials of the moment, namely exposed brick and high ceilings. The wooden displays, built by craftsman Emmete Rivera, are similar to the original Glendale Boulevard store and currently stocked with plenty of summer-lovin’ rosés, including a particularly effervescent Cremant d’Alsace from Domaine Allimant-Laugner. Katie Vonderheide, the former wine director at Chi Spacca who’s running the store, is excited about the Helmet Red from Paso Robles and Salamon Undhof Hocht’s Gravity Check from Santa Ynez Valley.  There’s also the canned wine from Oregon-based Union Wine Co. and a big beer selection from the likes of House Beer and Nobel Ale Works.

The stock will change as needed as they get more of a feel for the neighborhood and its tastes.

“The people who go to Silverlake Wine define what we have. Ultimately, the community will dictate what the store is all about,” says Clement. “What it becomes is determined by the people who come here.”

When asked what about the new shop he’s most excited about, Clement mentions the parking lot without hesitation. And there’s no denying that the ample, multiple-space lot, done up with a mural by artist Tofer Chin, is a real coup in this part of town, where parking is a commodity.

“To know that if people so choose, they can stay for as long as they want, or they can pop in and pop out is a game changer,” says Clement.

It will be particularly advantageous when the wine tastings start up in the fall—they’re currently waiting on a wine tasting license for the store—and when their new bar restaurant, slated to open a few doors down next month, debuts. Named ER Bar after Clement’s identical-twin sons, the space, which is still under heavy construction, is outfitted with a gigantic bar that runs the length of the front room. Out back, there’s a sizable outdoor patio, which is likely to be a packed with locals come summer. Matt Molina, the James Beard Award-winning chef formerly of Osteria Mozza, will be running the kitchen, which will turn out small plates with no particular regional emphasis.

“It’s going to be a small menu. Don’t think pub food. There’s going to be a lot of things you can eat with your hands—nothing too fussy, but things that are complementary to the beverage program,” says Clement, who promises that the beer, wine, and spirit lists will be “hardcore” but also adaptable to the wants of his new customer base.

“Our only agenda is that we want to be part of the party. We want people to have a good time,” he continues. “We’re excited to be in the Arts District. I just love how the Art District feels—I mean, I love how downtown L.A., itself, feels—but I think there’s a really special feeling in this particular part of the neighborhood.”

A new Highland Park Silverlake Wine in conjunction with Heirloom L.A., complete with a restaurant and pizza shop, is slated to open later this year right next door to La Cuevita on North Figueroa Street.