Home Uncategorized Shot Science: Is There a Way to Make Fireball Taste Better? 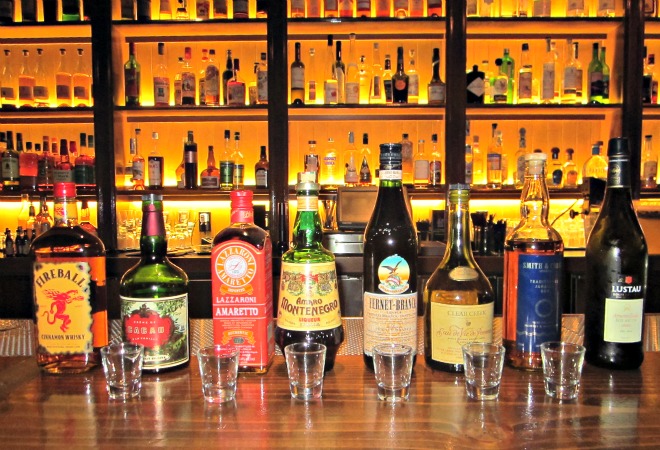 Love it or hate it, Fireball is a growing part of drinking culture these days. The sticky-sweet, cinnamon-flavored Canadian whisky has usurped the throne of Jägermeister as the shooter of choice for thrill-seeking partiers across the country.

What’s the appeal? It’s cheap and crowd-pleasing. It’s flame-covered label makes it “manly” enough for even the bro-iest frat bro, while it’s candy-like flavor render it palatable to that sorority girl who hates the taste of alcohol.

But here’s Fireball’s dirty little secret: A lot of bartenders drink it too.

“It’s got a certain low-brow charm” says Chris Day, a bartender at Honeycut and Tipple & Brine (he’s also a dissertation away from a doctorate in chemistry from UCLA) who begrudgingly admits to occasionally drinking the cinammon stuff. “Most bartenders don’t like ordering fancy cocktails when they’re off work, especially if the bar they’re at is busy. They prefer stuff that is quick and easy,” says Day. “That said, most stick with some kind of amaro or the usual Jameson. There are a few of us I know, though (not naming names) who have a not-so-secret crush on Fireball.”

At Honeycut, you can order blended shots of Fireball and Jameson pulled from a tap in their disco room. It’s known to sell out most nights.

That got us thinking. Could Fireball be improved by other additions? We met up with Day to taste test some mixed shot combos using en vogue spirits and liqueurs in a rare combination of high and low drinking culture. Was there a diamond in the rough?

1. Fireball + Fernet Branca
Rating: Yikes
“Too much mint and cinnamon.”
“The spicy flavors are fighting each other.”
“It tastes like burning. Like ‘Weekend at Burnies.’”

2. Fireball + Clear Creek Apple Brandy
Rating: Pretty Tasty
“Tastes like a baked apple”
“I would totally chill this and serve it as shot at the bar”

3. Fireball + Tempus Fugut Cremé de Cacao
Rating: Meh
“The chocolate and cinammon combo is good but it’s too syrupy.”
“Could be amazing in coffee, or with some lemon and cayenne.”

7. Fireball + Dolin Blanc Vermouth
Rating: Pretty Tasty
“It’s a little on the sweet side, but otherwise a nice combination”
“The herbal flavors suprisingly go well with the cinammon”

8. Fireball + Pernod Absinthe
Rating: Yikes
“Absinthe and Fireball should not go together.”
“Like taking a shot of Scope”

9. Fireball + Lustau Amontillado Sherry
Rating: Delicious
“The best combination by far”
“The dryness of the sherry kills the gumminess of the Fireball”
“A good balance of sweetness and acidity”
“Could be a waste of good sherry though”

Result: Fireball and sherry wins hands down. If you don’t believe us, go try it yourself. A bottle of good amontillado sherry will only run you around $15. As for Fireball, we’re sure you can find that around somewhere.