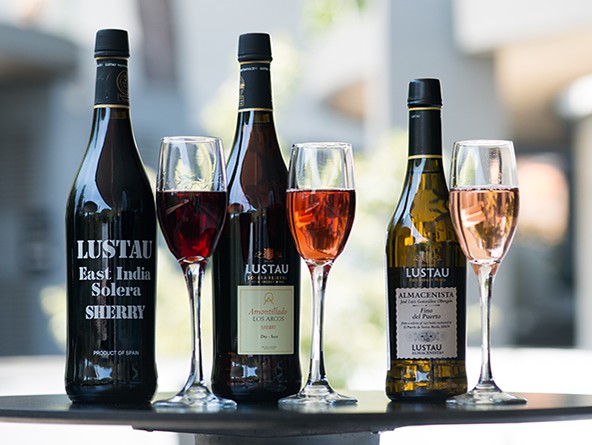 Ask any bartender about sherry—whether it’s a light, crisp fino or a nutty, rich oloroso—and you should expect some enthusiasm. In fact, don’t be shocked if it’s something along the lines of “I f*cking love sherry” gets blurted out. Behind the bar, sherry has replaced Aperol and Scotch as the shift drink of choice for many bartenders, and it’s working it’s way into cocktails and drink lists across town at an astonishing rate.

But to be clear, this isn’t the sickly-sweet stuff found in the back of your grandmother’s liquor cabinet. Like many involved in the beverage industry, Dave Kupchinsky and Kiowa Bryan—who both work behind the bar at West Hollywood’s Eveleigh—experienced the eye-opening variety and complexity of sherry during a trip to Spain’s Jerez region, the only wine region in the world that produces the fortified wine. “You travel to these tiny bodegas all over town run by families that have been producing sherry for generations,” says Kupchinsky. The secret to understanding sherry’s complexity, he says, is the solera system, a intricate method of blending that involves incrementally replenishing older wine with younger wine as well as flor, a layer of yeast that blooms on the wine’s surface.

For beginners, Kupchinsky recommends sampling each of the three main styles of sherry, which include fino, amontillado, and oloroso—each is aged and oxidized for a different period of time, lending deeper, richer flavors the longer the wine sits in the French oak barrel. What they all have in common though, its their refreshing dryness and ability to pair with almost any food. Kupchinksy admits he loves a glass oloroso alongside a piece of rare steak, while Bryan attests to the combination of fino sherry and oysters.

Sherry also does quite well in cocktails, where it’s lower alcohol content (sherry runs around 17-18%ABV) allow it mellow out stronger spirits like rum or scotch without muting their flavor. At Eveleigh, Kupchinsky serves a popular summer beverage called the Bamboo, a simple combination of fino sherry and vermouth tinged with orange bitters and a lemon twist. It’s subtle and smooth, a testament to the depth of flavor yielded by just a few quality ingredients.

If you’d like to learn more about the world sherry, your in luck—we’d recommend picking up Talia Baiocchi’s recently released new book, Sherry: A Modern Guide to the Wine World’s Best-Kept Secret. In the meantime, inquiring about the sherry selection at your local bar or wine shop isn’t a bad place to start either.