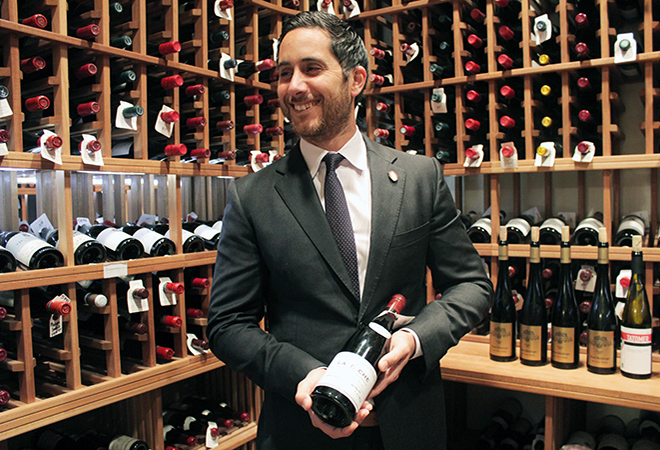 One of the highlights of this past weekend’s inaugural Santa Barbara Food & Wine Weekend was the “Meet the Masters Grand Dinner,” a decadent dinner which took place in Miro restaurant’s 12,000-bottle wine cellar in the Bacara Resort & Spa. (Typically wine-savvy restaurants have 500-bottle cellars.) And master sommelier Brian McClintic didn’t just pair wine with the multiple courses, he did two flights of vino: a new world wine from Santa Barbara County with its Old World counterpart. Yeah, that dinner sold out.

What’s the big deal? “Old world wines by design have compatibility with food in mind. It’s an extension of their culture,” said McClintic. “The producers featured here from Santa Barbara County represent a move in the new world to reflect that sentiment.” And these new world wines in particular emulate their old world mentors in their food-friendliness with lower alcohol levels, higher acidity, and restrained use of oak. To taste them side-by-side is a real treat for any oenophile.

Here are McClintic’s pairings for the Masters Grand dinner (including a couple bonus ones) if you’d like to experience these for yourself.

“Graham Tatomer will be shoulder-to-shoulder with not only one of the greatest producers of Grüner Veltliner on the planet, but with a winery that he worked harvest at on his two-year stint in Austria. Grüner Veltliner is as versatile a pairing as there is, even matching well with tricky vegetables like artichokes.”

“Provencal vs. Provencal-inspired. [I] wanted to give rosé a platform, especially for summer. If you’d drink a glass of rosé with tuna carpaccio on a beach in Nîce, why not with a Bacara Resort sunset?”

“Drink more Syrah. When made well it is as distinctive, complex, age-worthy, food-friendly as any red wine.  Everybody talks about Santa Rita Hills Pinot Noir and Chardonnay, but the best-kept secret is Syrah. We are slowly finding our identity with the grape here in Santa Barbara, thanks to people like Adam Tolmach of the Ojai Vineyard who has championed Syrah for over 30 years.  Meanwhile producers like Thierry Allemand in France’s Northern Rhone Valley are the beacon for singular expressions of the grape.”

“These are unrelated to the dinner but another example of Santa Barbara County project inspired by an old world region. Chinon is France’s prime region for Cab Franc. The whole region was the agriculture center of France and the producer’s there very much have an artisan, farm-to-table approach to their wines. The cab franc here is honest, food-friendly, and incredibly age-worthy. Lieu Dit is a project with winemaker Justin Willett and Les Marchands proprietor Eric Railsback that takes what artisan families like the Bretons have done and creates new template based on the individual terroir of Santa Ynez. Recommended pairing: pork and duck rillette.”

“Dry riesling has long had a home in the Mosel region of Germany. They can trace plantings back to 90 A.D. Santa Barbara is just beginning to realize its potential with this grape as evidenced by producers like Tatomer, Ojai, and now Stirm. This is a brand-new project set to release this summer. Riesling is the perfect muse to Ryan Stirm’s soil science major and the wines are fantastic. Recommended pairing: Ramen and Thai food.”

The master’s dinner series is on hold through the summer but will start up again in September, with an Italian duke no less, showcasing his Italian wines.