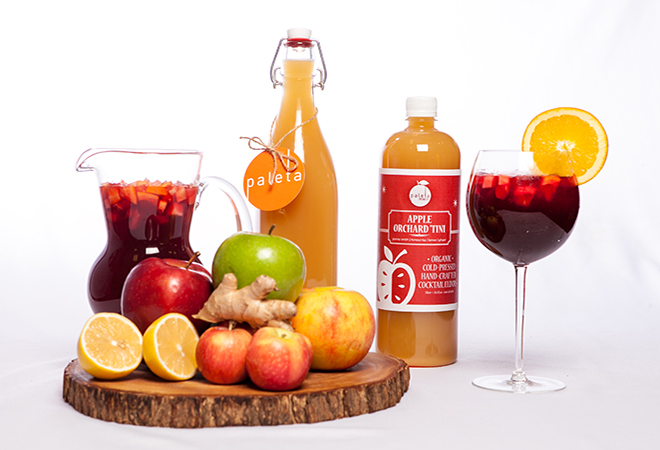 You know how when you go on a cold-pressed juice cleanse, all you can daydream about is how much better those juices would be if they were spiked? Because, you know, whiskey makes everything better. Now Paleta’s founder and executive chef, Kelly Boyer, created “cocktail elixirs” for this very reason. The Paleta Pressed Potables line is comprised of six organic fruit and vegetable blended juices meant to be combined with spirits or enjoyed on their own as a “morning after” elixir.

Flavors range from a “Sunshine State Sunrise” with orange, grapefruit, ginger, alkaline H2O, and cayenne to a “Holiday ‘Nog” with almond, cashew, alkaline H2O, coconut, date, vanilla bean, cinnamon, nutmeg, turmeric cardamom, maple syrup, and sea salt. These aren’t like those thick, syrupy TGI Friday’s premixes that leave you hating life the next morning because of all that hangover-inducing sugar, but rather thin cold-pressed juices that are “chock full of nutrients.”

Now why would you take something that you usually use to detox and turn it into something, well, not as good for you? Actually cold-pressed juices in cocktails isn’t all that new. Skybar on Sunset Boulevard debuted a cold-pressed juice program earlier this summer to go with its new cocktails and bar chef Matthew Biancaniello has used Clover juices in his cocktails at his Cliff’s Edge weekly pop-up. It’s definitely a thing now, especially for this summer.

Not that these are the “new skinny cocktails.” Paleta includes cocktail recipe suggestions on each 1-liter bottle of potable, and some of them are definitely not bikini-friendly. For the “Apple Orchard ‘Tini” it suggests mixing the juice with caramel liqueur, and for the “Magic Milkshake Mudslide” they push you toward Irish cream. But on the other hand, at least they don’t leave you feeling too gross.

I experimented with the sample of Paleta’s “Magic Milkshake Mudslide” I received, using it in place of the heavy cream in a White Russian cocktail recipe. As much as I love White Russians, they usually leave me feeling heavy and really guilty. But the shake–made of almond, hazelnut, alkaline H2O, coconut, date, cacao, cinnamon, and sea salt–gave my favorite cocktail a healthy-feeling twist. That’s different! Although, it’s not as thick as a traditional White Russian, I got the richness of the cocktail without any of the bloat.

Paleta Pressed Potables are $18 for the fruit and vegetable blends and $20 for the vegan mudslide and ‘nog blends. They’re available in packs of three online. New summer flavors include a “Strawberry Rhubarb Daiquiri” and a “Key Lime Serran-Aide Margarita.”