Home Drinking Cocktails Quentin Tarantino and Cocktails: Together at Last 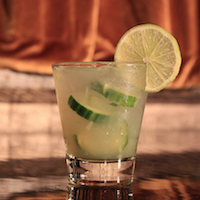 This Thursday, March 27, modern cabaret “For the Record,” which played in Los Feliz for three years, will debut in its brand-new home, the 6,000-square-foot DBA in West Hollywood. The series’ Quentin Tarantino-focused show will now not only have more space to showcase a rock concert mashup of soundtracks from Reservoir Dogs, Pulp Fiction, and Django Unchained, but a crafted cocktail program to complement the spectacle.

For “For the Record,” the cocktail consultants developed a straightforward, approachable list of drinks comprised of high-quality spirits and culinary elements for the masses. The menu is meant to be as versatile as the space with the drinks not only supplementing the dinner but serving as the perfect refreshment for parched nightclubbers. Nothing too bloody, splattery or involving anything remotely similar to “Marvin’s Face Shot,” however, but they all sound delicious nonetheless.

Devon shared the backstory of some of the cocktails you can look forward to on “For the Record: Tarantino” show nights ($12 each).

Big Kahuna: Aged rum, coffee liqueur, vanilla, cream, cinnamon. “There’s something really fun about White Russians. I don’t know that anyone drinks a White Russian in Pulp Fiction, but in the scene where Uma Thurman and John Travolta dance together and are drinking milkshakes, I was inspired by the milkshakes.”

Kiddo: Pisco, muddled Mandarin, Thai basil, lemon juice. “The name of the cocktail is more inspired by the film [Kill Bill] than the ingredients in that ‘Kiddo’ is just a fun word to say. This drink has beautiful, fresh Mandarin and aromatic Thai basil and it feels youthful and very quaffable. It’s what I imagine a young person having their first cocktail experience would love to drink.”

Paloma: Blanco Tequila, mezcal, seltzer, grapefruit and lime juices, smoked sea salt rim. “The Paloma variation has culinary elements which is great when you’re enjoying it with dinner. But that kind of drink is also great when you’re out partying and dancing with friends because it’s light, refreshing and it goes down easy.”

For the Record is live every Thursday through Sunday.