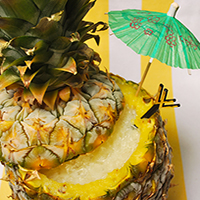 Social drinkers love summer. The daylight hours stick around longer and you just want to hang out with your best buddies with bottles of booze soaking in the sultry nights. Fortunately in L.A. we have bars that understand this, as evidenced by the slew of new summer cocktail menus coming out.

Here are places where you can get your drink on with your friends, be it with a pineapple for two or a bucket of bottled cocktails.

Warwick’s La Piña Colada Gigante is a Piña Colada built for two because why not? This fresh take on everyone’s favorite vacation libation is made of fresh pineapple juice, housemade coconut cream and Caña Brava Rum, shaken, and then served in a hollowed-out frozen pineapple. “The Piña Colada is an exceptional cocktail when made correctly. Because we use hundreds of pineapples a week for our juice, we challenged ourselves to do more than prepare it with fresh pineapple,” said Warwick Beverage Director Jason Bran. “We also wanted to serve it in a fun, but yet authentic way.”  Only problem is that there’s a limited number available per night so order them early in the evening. $35 for two.

Honeycut downtown kicked off its new summer menu last night, headlined by a new Slushee Service that’s pefect for your thirsty, disco-dancing entourage. That’s right, order a pitcher of the Piña Colada Slushee and top it with a float of your choice: dark rum, Campari, bitters, blue curaçao, or cremé de banane. If you want more than one float, it’ll just cost you extra. “We’ve found that floating different liqueurs and spirits on top of the Piña Colada slushee is pretty fun and amazing,” said Honeycut’s Dave Fernie. $60 for four, $100 for eight, or $130 for 12.

Goldie’s has facilitated patio drinking by throwing two of its most popular signature cocktails into jugs. Go for the Aperol Spritz (Aperol, sparkling wine, and grapefruit shrub) for $40 or the Golden Girl (spiced tequila, passion fruit, agave, and lime meringue) for $48. For something extra summery, try Goldie’s sangria with strawberry, peach, citrus, and bubbles for $25 a jug.

Harlowe has a party menu with punch bowls and carafe cocktails, but what’s better than a bucket of bottled cocktails to enjoy on their beautiful patio? You can mix and match their available bottled drinks: G&T, Americano, Sazerac, and Pisco Punch. It’s $65 for six and $100 for 10.

Spare Room is known for its cocktail punch bowls that are best enjoyed while bowling or playing dominoes, but this summer the cocktail lounge/bowling alley is debuting new tropical punches. Popularized by its tiki nights summer series, the new punches will feature a different recipe and a fine selection of rums every day. “Who doesn’t want to escape to Bora Bora when you are playing a game of dominoes? It’s heaven,” said Beverage Director Naomi Schimek.