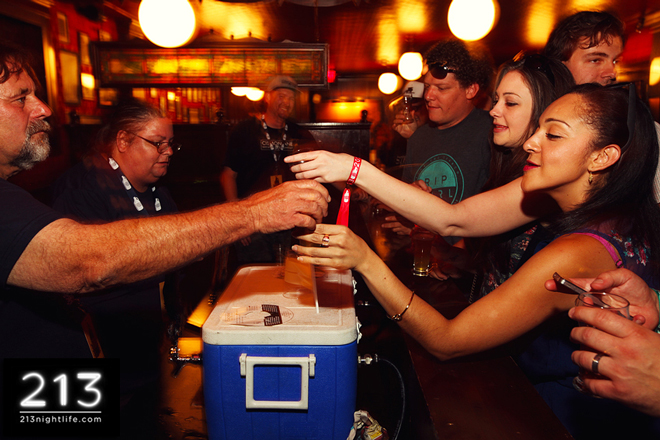 In anticipation of their craft beer extravaganza, I chatted with Hallie and Christina about the breweries and new releases they are most looking forward to at the crawl, beer myths and trends, weird brewing ingredients, and some of their favorite beer destinations in the world.

Any new breweries/new releases at the crawl this year you’re excited about?

New Breweries: “We’re thrilled to have the brand new Highland Park Brewery at the Crawl, the head brewer/founder is Bob Kunz and he’s a really talented brewer and old friend of ours.  We’re also thrilled to have Los Angeles Ale Works, another new brewery on the local scene.  And honestly we’re happy to have so many amazing breweries back with us that have been a part of the Crawl since the beginning.”

What style of beer do you drink the most in summer?

“In the summertime we usually start out with herbaceous funky flowery Saisons.  But when the hot weather hits we drink a LOT of Witbier in the summer. It’s super refreshing and light-bodied but still packed with spices and citrus.  Alternatively, we also lift many black lagers because with their subtle waft of smoke from the charred malts used they are perfect beers to pair with bar-b-que. Of course you can’t go wrong with a super-hoppy local west coast style Los Angeles IPA by the pool!”

When you have an ice cold beer in your hand, what food pairing really takes you to your happy place?

“Well—and we’re going to get super nerdy here—if we’re drinking an ice cold beer, we’re probably drinking a style that benefits most from being served colder. Different beer styles should be served at different temperatures, just like a sauvignon blanc should be served at a different temperature than a cabernet sauvignon. SO…that being said, and to answer your question, if we’re drinking an ice cold beer, we’re most likely drinking a Pilsener.  A favorite pairing is a nice arugula salad with strawberries, goat cheese, and pine nuts!  Also, there’s almost nothing better with a lobster roll!”

While we’re sure you could thoroughly school us, what’s just one main beer myth you’d like to debunk?

“We’ve done a lot of work to debunk what we call Beer Myth #1, which is that if a beer is dark it means that its bitter and heavy.  We see that most people now get that, especially with the new Black Lagers and dark Saisons available now.  The next frontier is with the chefs/owner and the myth that beer doesn’t belong at the high end restaurants.  We throw down the gauntlet to all chefs and sommeliers to put some good beers on their menus and school their staff on how to pair beer with food, how to talk about beer and how to suggest beers to guests.  We’re not suggesting that every restaurant should become a craft beer bar, but please give us five or six good and varied choices!  Why have a painstakingly hand-picked wine list and free-range Jidori chicken that was allowed to stay up watching television until 11pm on the menu, but then give us 4 of one style of beer?”

Wildest thing you’ve ever heard of being brewed into beer?

“Well, we could answer this question with the truth, which is disgusting or we could answer it with the second wildest thing we’ve heard of being brewed into beer which was when Sam Calagione from Dogfish Head Brewery made his Chicha beer which is a native corn beer from Central and South America.  Before the beer is boiled, the brewers chew the corn – actually maize – and then spit it out and let it dry before using it in the beer.  The enzymes in the saliva break down the starches to more easily fermentable sugars, similar to the modern malting process.  We actually tasted the beer and, if you didn’t think about it, was really quite delicious.”

What would you consider are some emerging trends in beer right now?

“The biggest trend that’s happening right now is a move towards more sessionable beers.  There’s been kind of a rubber band effect in the beer world that is recoiling a bit from the ‘extreme’ beers.  You know, the beers that are the MOST alcoholic of all time and the beers that use five trillion hop additions to have the MOST bitterness of ALL TIME.  Now there’s a movement that’s like “Listen, let’s just have a really delicious beer that doesn’t kill our palate, that we can keep discovering new and nuanced flavors with each sip and with which we can stay on our bar stools and continue to have an intelligent conversation after drinking one or two or three.”

If you could go on a beer crawl anywhere in the world (besides Los Angeles, of course), where would it be?

“The thought process is Portland, Oregon is a mecca and the beer there is amazing, Chicago and the Midwest have some of the best new breweries in the country popping up. North Carolina is a relatively new craft beer destination, but our choice would have to be Northern Italy, the Genoa area in particular.  Italy is having (and has been having) a craft beer revolution!  Their brewing tradition (yes they do have one) that was lost hundreds of years ago is completely reinvigorated and the Italians are approaching beer with the craftsmanship and care and creativity and patience with which they approach all food.  They are drawing from the creativity of the Belgians, the discipline from the Germans, and the craziness from the Americans to brew beer that is truly innovative.”