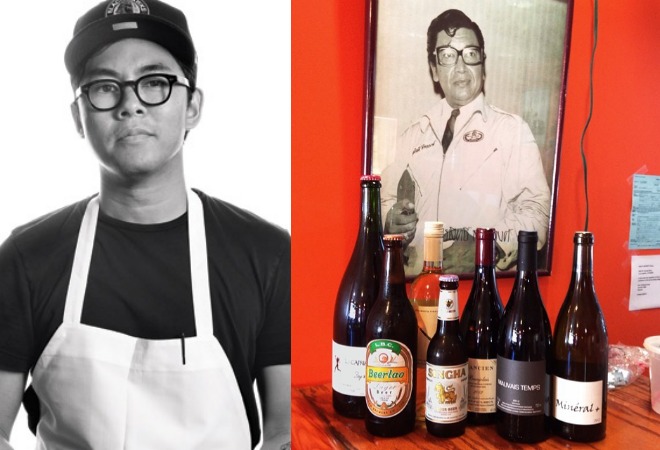 Oh, what a glorious day. After a protracted wait due to civic red tape, Silver Lake’s Night + Market Song finally received its beer and wine license this week.

Owner, chef, and self-admitted wine geek Kris Yenbamroong couldn’t be more relieved: He’s always believed that alcohol was a huge part of the Night + Market ethos, which draws inspiration from the backcountry roadhouses of Northern Thailand where drinking alongside your meal is darn near mandatory.

According to Yenbamroong, he’s starting small this week by serving Singha and Beerlao beer, a few white wines, a few reds, and a sparkling wine. He’ll also be moving the front row of tables away from the bar counter and will add stools, forming a small bar area.

But that’s just the beginning. We spoke with Yenbamroong via text about his eventual vision for what may soon be one of the most interesting wine lists in Silver Lake, if not Los Angeles.

Congrats! Do you feel like you finally have the full restaurant experience?

“Yeah, knock on wood, but I think we’re in the clear now. It was a weird feeling to worry about being a permanently dry restaurant for a while. Like I’m so involved with soda now and I don’t care about soda or soft drinks. But when it gets super stressful in the kitchen and I come out of the kitchen for a drink, then I have to slam a Fanta. It’s not the same. I’m hoping that now that the license is active, I’ll quickly forget about the months we went without our drinks.”

What do you plan to feature on the drink menu?

“Miller High Life. Singha. And a huge wine focus obviously. I’ve got my hands on some Mauvais Temps by Nicolas Carmarans. I think I’m the only restaurant in the California that’s pouring it. Lou [Amdur] has some for retail and so does Fifi’s Imports in NYC but that’s it really in the entire country. The list is going to be a bit smaller than WeHo because of storage space, but it will probably be changing up more often. I’ll probably carry around 10 wines, many of which we’ll end up pouring by the glass, and a small number of wines available by the bottle. Definitely something for most everyone.”

Will wine be the main focus then?

“Wine is a huge emphasis for me. I opened Night + Market almost 4 years ago with the intention that it would be equally a place to go and open a bottle of wine—not even knowing what the food offerings were, or if there were even food offerings—and equally a place to have food that maybe has less of a spotlight on it, meaning a drinking place as much as an eating place. So my wine buying has a lot to do with that.”

“There are wines like the Mauvais Temps that I buy up the whole stock of, before it’s even offered anywhere else, and I put it on the list to entertain the fantasy that one day someone will walk through the door and just order that bottle, drink it and not even eat. Of course, in the 3 1/2 years that we’ve been open, that’s never really happened. But I like to keep the dream alive, because I know there’s not many venues where you can go for good wine in L.A.”

So the dream is that more people order wine by the bottle?

“I hope so. That’s been a huge thing for me, too, wanting for people to enjoy stuff by the bottle. Because the great majority of wines I serve are those types of wines you are meant to pop open and drink in one sitting. The thing that Thierry Puzelat is always quoted as saying is that his favorite wine is the one he can down a bottle of in 10 minutes. That’s sort of the way I want people to eat and drink at Night + Market. Nothing’s precious here.”

Any particular bottles you’re excited about?

Well, I continue to be excited about all good wines from France’s Loire Valley, because that is my first love. Noella Morantin’s Terre Blanche (Chardonnay) pet nat, for example. It’s a super-refreshing pétillant naturel [a natural sparkling wine] which are always a big part of our list (maybe 20%), but this one somehow feels a little more luscious or elegant. It’s just a pleasure. Her wines are wines I will always support. We will probably pour her basic Gamay bottling, La Boudinerie, too.

“Somehow I became associated with shunning Riesling, and it’s most definitely not because I don’t enjoy Riesling. It’s because early on, when I was working on the idea for Night + Market, I thought along the lines of: Most Asian and Thai restaurants, the ones that even bother with wine, have such a specific focus in terms of the wines they offer. And that most definitely is not Loire-focused. It’s not pet-nat focused. It’s not funk-focused. So my idea to not overly-emphasize Riesling (at times we have had none on the list), came out of that it’s a very common pairing with Thai food. That said, my wine pairing for DineLA consists of two Rieslings and I will probably feature more. I’m excited about the Hofgut Falkenstein wines, from the super-fierce dry ones to the softer, but minerally and complex bottles like the Feinherb, which we pour at WeHo now. There is a Riesling pet nat from J. Brix here in California called Cobolorum, made in real small quantities, I believe. That’s something I want to get my hands on.”

One last thing. You wrote a letter to Mayor Eric Garcetti a while back in hopes that he could possibly expedite the process of getting your license. Did that end up helping at all?

These 9 Local Chefs Are Helping Make L.A. a Dining Destination

3 Restaurants You Have to Try This April