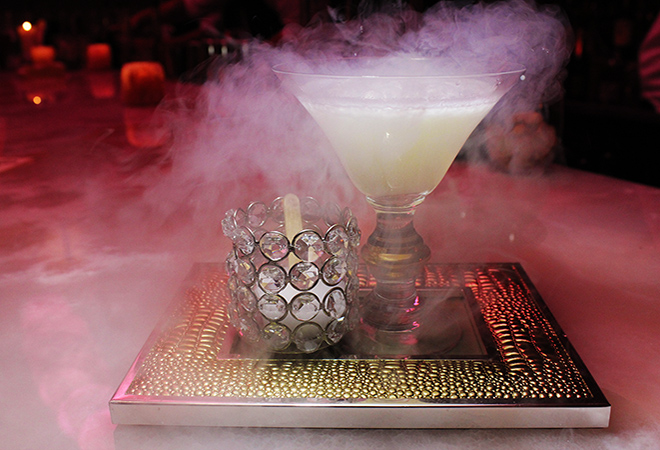 Remember back in 2009 when we all went crazy for liquid nitrogen? Namely that liquid nitro Caipirinha at SLS’s Bar Centro? Being served a billowing liquid nitrogen cocktail was equivalent to getting a bunch of sparklers on your birthday cake—that “Oooh!” factor. Nowadays, the excitement for flashy cocktail shows has mellowed out considerably in Los Angeles. Bartenders have relegated its use to prep, like for nitro alcoholic Otter Pops.

But Barton G L.A., restaurateur/hotelier Barton G. Weiss’ newest restaurant which opened this week, is doubling up the nitro action on La Cienega, just up the street from SLS. Why bring it back? Because Barton G is all about theatrics and spectacle. The dessert tray of petit fours is served in the shadow of a Marie Antoinette bust covered with a towering pink cotton candy wig. A giant chocolate egg is delivered alongside a tall wobbling bird statue. Nitrogen cocktails fit in nicely here.

“The nitrogen is inherited from our Miami locations, and is incorporated in the cocktail program for ocular demonstration,” said Assistant General Manager Sean Ryan. “But it also serves as a utility. We’re freezing the alcohol popsicles and since vodka normally freezes at -175F, this does it at -320F. The result is water vapor but it also adds more of an alcohol component back into the drink.”

As if the water vapor, or “smoke,” weren’t enough, each cocktail is presented on a picture frame tray surrounded by little tchotchkes like a gold Buddha or sparkly stiletto. The server will stand by to make sure you don’t down the liquid nitrogen while it’s still bubbling because, you know…

With a bar program using liquid nitrogen in lieu of an ice program, Barton G is not going to use plain ol’ citrus in the drinks, naturally. Chef Scott Linquist has instead created a variety of shrubs which dominate the cocktails. It’s even present in their Manhattan variation called “Aqua Vitae,” which uses apple-raisin and orange-cardamom shrubs. “The acidity of lemon, lime and orange gets old after awhile,” said Linquist. “The shrubs balance the drink with acidity, sweetness, aromatics, and flavor.”

The restaurant will offer up five different liquid nitrogen cocktails in addition to five specialty cocktails, which will then be updated seasonally. Here’s a look at their opening cocktail offerings: