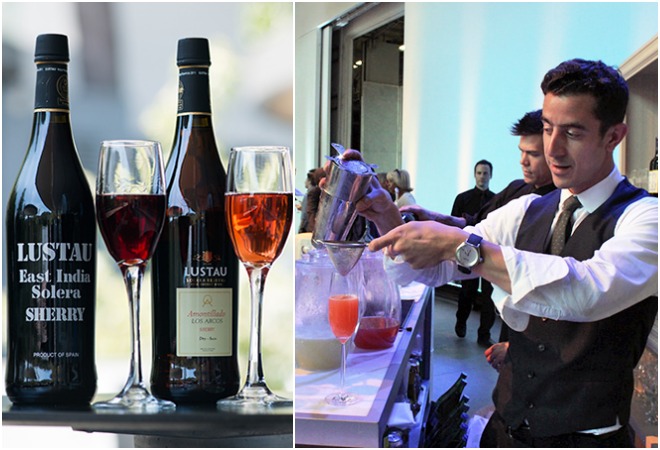 There really is no better way to enjoy the Hollywood Bowl than while sipping on vino with wonderful summertime concert music washing over you. Those couple glasses of Cabernet during the Grease Sing-A-Long, after all, give you the courage to sing. But this year, the Patina Restaurant Group is providing an extra incentive to forgo B.Y.O.B. (or at least supplement it): a new sherry menu at its year-old al fresco wine bar and lounge.

Why, of all things, sherry? “It’s something that’s perfect for summertime weather,” said the Patina Group’s lead West Coast mixologist Paul Sanguinetti. “It’s something you can sip on its own or put into cocktails as well.”

The sherry offerings here will start off small with a few selections: Fino, Alexander Jules; Amontillado, Alexander Jules; Oloroso, Lustau Almacenista, Pata de Gallina; and Pedro Ximenez, Alvear 1927 Solera. Flights will be available to acquaint drinkers with the different styles and will also work well with the wine bar’s food offerings. “Last year’s menu had a lot of Spanish-influenced foods. It gets really hot in Jerez and you have a lot of salty foods, so a nice chill Fino Manzanilla would pair perfectly with these dishes,” said Sanguinetti

Since the wine bar has a limited wine-and-beer-only liquor license, Sanguinetti plans to work the sherry into his low-ABV cocktails. “It is a fortified wine, so it’s really fun to experiment with cocktails.”

But for now, they have shochu cocktails. One such creation is his Barrel Aged Manhattan with Byrrh Grand QuinQuina, Carpano Antica, Yokaichi Mugi Shochu, bitters, and maraschino cherry. “Under 27 percent is allowed, bitters is another loop hole which is nice. I’m trying to experiment what we can do under that license but still make fun, quality cocktails.”

Check out the new sherry bar on the Bowl’s opening night this Saturday.