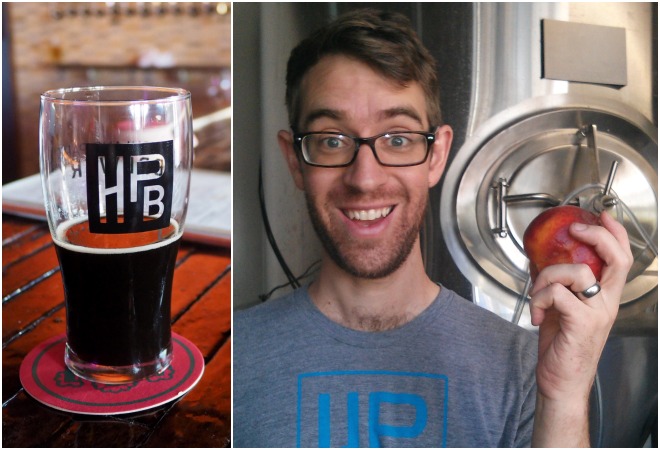 Meet Your Brewer puts the spotlight on some of the unsung heros behind L.A.’s growing craft beer scene and gives a glimpse into what drives their passion for beer.

When brewer Bob Kunz moved to Los Angeles in 2006, there wasn’t much of a craft beer scene.

There were a few scattered brewpubs, a handful of beer bars stocked with craft taps, and there was Pasadena’s Craftsman Brewing Co. It was a beer desert compared to Kunz’s home-state of Washington where the beer culture is ingrained and pervasive, and where he learned to love beer and brewing.

When an opportunity opened for Kunz and his wife to move to Los Angeles, Kunz called all the breweries in the area that he could find. Mark Jilg, the founder and brewmaster of Craftsman, was the only one to return his call. Jilg says he hired Kunz sight unseen because of his “infectious enthusiasm for beer,” adding that “Bob has a freewheeling sense of beer’s aesthetics somewhat similar to my own.” Kunz wore many hats in the small Pasadena brewery, handling tasks from brewing, to cleaning, to distributing the finished beers around town, which lead to many contacts within LA’s nascent beer industry. He enjoyed (and excelled at) the person-to-person contact of the retail-side of the beer industry, and after a couple years at Craftsman, Kunz left to join San Yoon’s new Father’s Office location in Culver City.

“Personality wise, he and I are really different,” Mark Jilg told me when I asked if he was surprised Bob left the brewery for Father’s Office. “I think life [at Craftsman] was a little too monastic for him.”

“It was a pretty emotional experience, leaving Craftsman,” Kunz says. “I relate to what they are doing a lot, but there wasn’t room for me to grow. I knew I wanted to open up a brewery and I needed more experience.”

His roles at Father’s Office ranged from working the door, to bartending, to eventually serving as the General Manager at both locations, where he chose what craft kegs to serve and helped to develop the staff’s passion for beer. On the front-lines of the craft revolution in L.A., Kunz experienced not only what the beer fans wanted to drink, but also how their palates were changing. Turns out they were changing quickly, as the thirsty populace began to embrace craft beer and seek-out local producers.

“We’re at a point in history where we have more access to flavor than anyone has ever had, and craft beer embodies that,” Kunz says, adding, “people’s palates are more open [to new flavors] than they’ve ever been.” He is excited by the opportunity to expose local beer lovers to new flavors and unexpected combinations, but is even more excited to get near-instant feedback from the locals drinking the beer at The Hermosillo—just yards away from his new brewery, and a bar that Kunz grew attached to after moving to Highland Park.

Kunz would belly up to Hermosillo’s u-shaped bar after a shift at Father’s Office. The former escort bar had been converted to a bohemian-friendly wine and beer bar by a group of young restaurateurs, and it wasn’t long before Kunz had befriended Ross Stevenson, one of the bar’s owners. He’d bring in homebrew to share with the bartenders, and Stevenson and the other partners were quick to realize Kunz had a rare combination of industry experience, brewing acumen, and an artist’s mindset that it takes to lead a successful craft brewery. Bar room chatter about “going pro” soon turned into hashing out plans for a backroom brewery. The team began the plans and paperwork for Highland Park Brewery in early 2013, and Kunz left Father’s Office shortly after to head up the brewery build-out.

The Hermosillo’s defunct VIP area-turned-storage room that had once been earmarked for conversion into a patio was instead remodeled into an under 500 square-foot brewery complete with a 7-barrel brewhouse (about 220 gallons), a pair of 15-barrel fermenters, a brite tank for carbonating the finished beer, and a pair of winemaking vessels known as “Totes” dedicated to sour beer production. The DIY ethos is obvious in the cramped space, but the beers are anything but amateurish and even the early batches have garnered positive-reviews.

Kunz wants to brew beers that reflect the neighborhood, and he’s offered nearly a dozen different brews in his first month. Many have been one-off infusions of local ingredients into base-beers. The excellent Wake Up coffee session ale received a dose of lavender picked from Hermosillo partner Michael Blackman’s backyard and became Wake Up At Michaels. The hoppy belgian single Vacation became Staycation with the addition of peels from forged lemons and sage from Kunz’s garden. He says the clientele at the Hermosillo have adventurous palates, a love for sour beers, and a near unquenchable thirst for hops. He plans to always offer an IPA alongside three or four other house brews, and he wants to emphasize sour beer production.

In a region that’s been underserved by craft breweries for the last decade, many new operations are opening big. Breweries with massive production facilities, risky barrel-aging programs, and ambitious distribution agreements are trying use volume and aggressive growth to make up for lost time. Kunz is obviously taking a different approach, and will focus on developing the brand carefully. “I like slow growth,” he says, lending the impression that he is engaged to the idea of beer as a journey, not just a product. He wants to guide people on their flavor-filled beer journeys, and if the early batches from Highland Park Brewery are any indication, we’re all going to have a great trip.