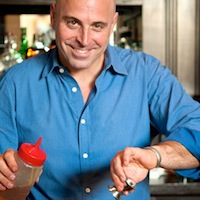 Matthew Biancaniello has left an indelible mark on the L.A. craft cocktail scene over the past four years. His delectable farmers’ market driven drinks completely transformed the beverage program at Library Bar, an unmarked, unassuming little room that occupies a corner of the Hollywood Roosevelt Hotel. And while he recently announced that he’d be leaving his post—his last shift there is this Wednesday night—he’s really excited about his future plans. So am I.

Take me back to the beginning. How did this all start?
The bar originally served as a VIP area for the adjacent nightclub, Teddy’s. When I came on board, it was very much a regular bar, serving what you’d find anywhere else: Jack & Coke, vodka & Red Bull… stuff like that. But we also had a mandarin cosmo, and I decided one day to use fresh mandarin juice in place of the mandarin vodka we’d been using. I couldn’t believe how much better it tasted, and it got me to start playing with other drinks. Our pomegranate martini got reworked with fresh pomegranate juice, and the manager was blown away by the difference. I hadn’t really asked permission to change anything; I just started doing it.

So you had some prior bartending or restaurant experience?
No, not at all. I’d held plenty of jobs before then, but not kitchen related.

Like what?
I did a bit of work in advertising, and I sold pin-up art for a while, actually. Landscaping. Underwater filming. I also did some animal handling for TV and movies.

So where’d the cocktail inspiration come in?
After I started playing around a little bit, I really got excited while reading Dale DeGroff’s book, The Essential Cocktail, and I started going out to see what other people were doing with drinks. Then, an ambassador from Milagro [Tequila] gave a presentation to some of the hotel staff, and that’s when I truly saw it as a craft. He talked about the culture and drinks from the turn of the 20th century, and I was fascinated by it.

Your drinks use a LOT of produce.
Produce has always been front and center, both in my mind and literally at the bar. I always heard about creating a nice backdrop, with a selection of nice bottles lined up behind the bar, but I wanted to display everything, with the produce right there in front of the customer to create a sense of wonder. I would spend 1 1/2 to 2 hours at the farmers’ market, talking with vendors, finding new items, and tasting everything. Having all the produce out on the bar not only looks and smells nice, it also tells guests immediately upon entering that they’re in for a unique experience.

Some of your ingredients—arugula, Balsamic vinegar, bell peppers, horseradish, and shiitake mushrooms to name a few—initially sound strange to have in a drink, but you find a way to highlight them beautifully.
Thanks. Being self-taught, I suppose makes me less tied to formulas. So much about bartending is based on classic formulas, one part this to three parts that. Sub the rum for tequila, and it’s called something else. I never approached anything with a formula. “Last Tango in Modena” [a blend of Hendrick’s gin, strawberries, and 25-year-old aged Balsamic vinegar, topped with a St. Germain foam] doesn’t follow a traditional formula… there’s no citrus, no mixer. But it’s the drink I’m most proud of, and it’s also what started earning me some media attention. I liked surprising people with flavors, and I liked using things that were unusual, like pineapple guava, curry leaves, or yellow mulberries. I’d go to the farmers’ market in the mindset of a beginner each time. And when a bartender from The Varnish came in, looked around, and told me I should start thinking about editing myself, I knew I was doing something right… because it wasn’t anything like what he was used to.

Some days I know were up to 16 hours long, with market visits, preparation of your syrups, juices, and infusions, plus of course your actual bartending shift. What did you find yourself doing in your off time
The absolute opposite of my job. Ha! I really enjoyed being able to take time for long Malibu hikes, and I’m a big fan of yoga. Conveniently enough, it was these long, relaxing periods of clearing my mind where some of my best recipe ideas would come to me.

How about for eating and drinking?
I don’t drink much, believe it or not. But because I taste every cocktail I make before serving it to make sure it’s right, I get a lot of sweet and sour, and it sometimes leaves me wanting something bitter. So you might on occasion find me enjoying Cynar [a bitter Italian liqueur made from artichoke and a dozen other botanicals] on the rocks.

For food, I love Providence and Animal. They’re always great. Inaka on La Brea is my favorite spot in the city; it’s a macrobiotic restaurant and their fish is so clean, so perfect. And for the best ceviche in town, I head to Mo-Chica. Oh, and I always enjoy La Poubelle on Franklin.

And lastly, the million-dollar question: what’s the plan now that your tenure at Library Bar is coming to a close?
I’m definitely looking forward to some time off, but I do have a lot of projects in the works. I’m shopping a TV show and a possible book deal, plus I’m doing plenty of events and consulting. The main plan is to open my own place on the Westside—ideally Venice—within a year. Longer-term life goals, though, would probably involve moving to Maui and growing vanilla beans. I’d want to have my own place there, and maybe another in Vietnam, while doing one-time events all over the place.