Home Drinking Cocktails Ludlows Cocktail Jelly Shots: How to Party on the Go 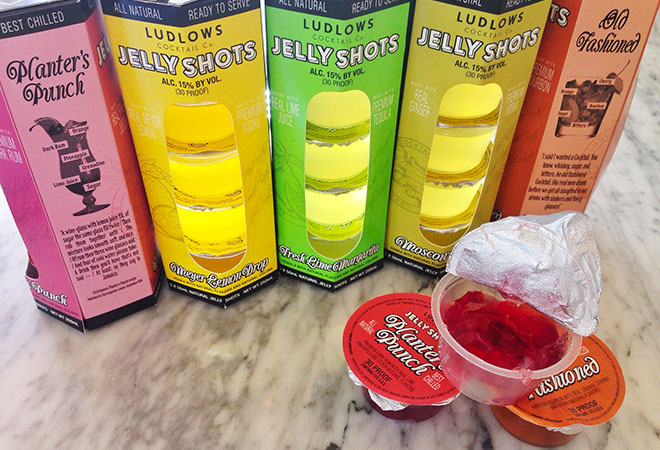 You’re a drinker with discerning tastes. For you, a cocktail is meant to be enjoyed, not used as a means to get wasted. So the regular ol’ Jell-O shot made with flavored gelatin and cheap booze is definitely not going to cut it. But what if someone found a way to package and sell something like those gin and tonic jelly shots that Providence used to do, or Ink bartender Gabriella Mlynarczyk’s reversed Hot Toddy Jell-O shot? A fancy jelly shot made out of premium spirits and natural ingredients?

After researching the small world of prepackaged jelly shots, Ethan Feirstein and Freya Estreller (the co-founder of Coolhaus) saw the market for a craft cocktail version was wide open. With their new company, Ludlows Cocktail Co., they traded the artificial flavors and cheap booze that are more commonly available for natural ingredients and premium spirits. Instead of offering a variety of fruit flavored neutral grain spirit gels, Ludlows’ opening selection is made up of actual craft cocktails, like the Old Fashioned and Planter’s Punch.

Ludlows partnered up with Michigan’s Temperance Distilling Company, who helped them source the spirits and all-natural juices as well as formulate the recipes. The process of creating tasty, shelf stable jellies took three months to fine-tune and six rounds of testing, during which Estreller would make the cocktail jellies in her kitchen and then send them to Michigan, where Temperance would try to match the specs and flavor.

Apparently, the use of natural ingredients was a difficult hurdle to overcome for Temperance, which has its own jelly shots in flavors like Blue Hawaiian and Fuzzy Navel. “It’s kind of counterintuitive to these places who were like ‘We’ve never done all natural cocktail-based Jello shot before,’” said Estreller. But after much pushing they were able to make it happen.

Since the goal isn’t to get drunk, it’ll take you more than your regular amount of homemade Jell-O shots to get a buzz on. ”These are 50ml because that’s the minimum amount of alcohol you’re allowed to sell in individual servings. It’s the equivalent of those alcohol minis,” said Estreller. “At 30 proof it’s 15 percent alcohol, so kind of like having two ounces of a really strong wine. If you had two or three of these, it’s like you had a six-ounce glass of strong wine. You’ll feel it.”

A package of five will go for $12.49 to compete with a bottle of wine for hostess gifts. “Instead of bringing a random bottle of wine where people don’t know if it’s going to be good, you bring this.” The fact that this jelly shot doesn’t require refrigeration opens up the world of possibilities: Jelly shots while camping, hiking, sunbathing at the beach. Enjoy it on a flight or offer it for adult trick-or-treating during Halloween parties. During pre-launch, the jellies have been popular at birthday parties and weddings.

Ludlows Cocktail Co.’s jelly shots aims to make it onto the shelves of places like Whole Foods and Beverages and More before the end of the year. A Kickstarter campaign trying to raise $35,000 hopes to speed up the process by a month or so.

To help further raise awareness of their jelly snacks, they’re sponsoring a series of L.A. barhops in August when barhoppers, for $50 a ticket, will get to try cocktails at bars followed by the jelly shots version. They will also get free Uber transportation, free Coolhaus ice cream at the end of the crawl, and a swag bag with hangover relief.

If you can’t wait for these to hit the shelves, Estreller shared her recipe for Negroni Jelly Shots to tide you over.

1. In a 2-quart sauce pan, add water and agar. Let agar soak for 5 min, whisk, and then bring to a boil.
2. Shut off heat, add sugar to liquid and whisk until dissolved.
3. Stir in gin, Campari, vermouth and orange juice.
4. Place 1 oz cups on a 1/2 sheet baking pan
5. Use a measuring cup with a spout to pour liquid into 1 oz cups.
6. Wait 30-45 minutes for jelly shots to set at room temp or pop in refrigerator. Top with 4-5 Pop Rock flakes when serving. Store with plastic lids on or on Saran wrapped sheet tray for up to 2 weeks.

1. In a 2-quart sauce pan, bring water to a simmer and whisk in sugar until dissolved.
2. Shut off heat and sprinkle gelatin on top until it’s softened, then whisk together. Warm more  to dissolve, but do not bring gelatin to a boil.
3. Shut off heat and stir in gin, Campari, vermouth and orange juice.
4. Place 1 oz cups on a 1/2 sheet baking pan.
5. Use a measuring cup with a spout to pour liquid into 1 oz cups.
6. Wrap tray in Saran wrap and refrigerate for 3-4 hours. Top with 4-5 Pop Rock flakes when serving. Store with plastic lids on or on saran wrapped sheet tray for up to 2 weeks.