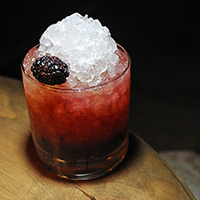 Don’t you just want a straight-up drink sometimes? One that you don’t have to wonder about because you’ve never had something like coconut-infused Campari or that unfamiliar small-batch brand before? Don’t get me wrong. Obviously I’m a big fan of craft cocktails. But sometimes a person just wants to chillax with their simple, tasty drink. And barmakers Steve Livigni and Pablo Moix get that. At their new bar The Chestnut Club, which took over the space previously occupied by Central and 14 Below in Santa Monica, they bring good drinking back to the basics.

“We just wanted it to feel like an old school bar,” said Livigni. “When I grew up drinking in L.A. in the early 2000s, when Raul Yrastorza [who is now managing Chestnut] first started managing bars like Smalls, El Carmen when that opened, there was a lot of lounges, like dark places with lots of booths and no covers or guest lists. Just drinking. Now there aren’t that many of those.”

That simplicity and straightforwardness is carried throughout their cocktail menu where you won’t find anything like housemade syrups or bitters. In fact, he says that none of their bars like Scopa Italian Roots in Venice use syrups or liqueurs, not wanting to “put any extra water in any of the drinks.”

This no-nonsense approach suits the Santa Monica neighborhood at 14th and Santa Monica Boulevard: an area surrounded by a hospital, car lots, and expensive apartments, but starving for a decent cocktail bar. And yet the boys didn’t want to turn off neighborhood locals or would-be drinkers with the cocktail pedigree they’re toting from places like La Descarga, Pour Vous, and Black Market Liquor Bar. “We didn’t want to make drinks that were too heady for people. And this is a pretty casual neighborhood. We just wanted the drinks to look nice and not too crazy or fancy with things that scare those kind of people off.”

Here are other things you won’t find at The Chestnut Club and how Moix and Livigni have streamlined your drinking experience.

No seasonal cocktails: The closest “seasonal” cocktail you’ll find on the menu are the Spanish-style gin and tonics. There are three variations, mixes of aromatics, all served in goblets. For the opening menu one features kumquats, another Serrano chili, and a final one with lavender and grapefruit. These will be updated seasonally but that’s it.

No geeky drinks: What you see is what you get here with a cocktail menu that simply lists spirit, modifier and bitters. No brand names and no infusions. “No molecular stuff or farm-to-table kind of shit,” said Livigni.

No big name liquor brands: Livigni and Moix will only carry what they like to drink no matter how much money gets thrown their way. “We could have gotten thousands of dollars of credit card swipes from companies to carry shit that we didn’t want to carry but it’s not worth it long-term,” said Livigni. “We just want the things that we like the most.” By the way, this philosophy carries over to beer, too, so no Budweiser.

No burlesque: I know, boooo. “We didn’t want to do anything that was a show or a secret entrance. We just wanted a bar that makes nice drinks and has good music. No burlesque. We’ll let the professionals handle that. The [Houston Brothers] know how to do that really well.”

The Chestnut Club is open daily at 5pm.