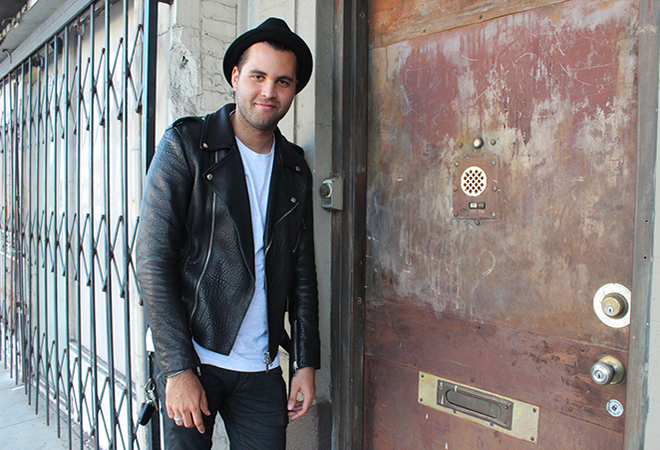 Nightlifer Jeremy Fall stands in front of the copper door to his nightclub pop-up Genesis.

Think of a nightclub with no dress code, no bottle service, and music that will get you on the dance floor right quick because it is so your jam. Sounds beautiful and make-believe, no? But that’s actually the vibe fashion designer/event producer Jeremy Fall is going for in the two nightclubs he’s opening in Hollywood later this year (one of which will take over the old Writer’s Room space in the form of a “grungy disco” called Golden Box).

What’s weird is that Fall is 23 years-old, so one would assume that he’d be all about dancefloor electronica, seeing and being seen by beautiful people, and bottle service. But after being on the L.A. nightlife scene for eight years and having worked at Avalon and with the likes of the Houston Brothers, he wants the polar opposite of that in his venues.

“There’s no place, especially in Hollywood, where you can just go out stress-free and have fun and drink. It’s either somewhere you feel like you have to impress everybody because it’s a high-end place, or you can’t get in because the bouncers are douchebags,” he said. Instead Fall wants to reintroduce the basics of what going out used to be: just having fun.

For him that means making it as easy to have a good time at his place as you would your friend’s house party. The venues will be “intimate” with about a 160-person capacity and an RSVP list to keep things manageable. He’s actually giving a sneak peek of his “no fist-pumpers” ideology when his five-week summer series, called Genesis, pops up in a hidden attic on Vine Street, right next door to and over 1933 Group’s Sassafras this Saturday, July 26.

But just because it’s adjacent to the cocktail-focused bar doesn’t mean you can order up a barrel-aged Manhattan. That’s because mixology isn’t fun, says Fall. You won’t find cocktail menus at his nightclubs either. He’s not knocking it; some of his best friends are bartenders, like Steve Livigni. He just sees people ordering drinks and then returning to the dance floor. Simple. “The market is coming back to its roots. For awhile it was getting crazier and crazier with mixology and the 17 ingredients,” said Fall. “I think people are getting sick of that because at the end of the day people want to go out and have fun.” If you really want an Old-Fashioned, though, you can still get one, there just won’t be a cocktail list.

And yes, no dress code. Even though he moonlights as a fashion designer, Fall says he’s never believed in them and won’t be trend-forecasting for his clubs. “I’ve seen people who are extremely well-dressed and worn a snapback and look absolutely great in it. I think there’s always an exception. I don’t want people to feel like they can’t be themselves.”

Fall plans to open more “mini-clubs” but Hollywood is his Ground Zero. “My dream is to open in places like the Westside, Nashville, Orange County…but in order to create that vision that I’m trying to execute, realistically, Hollywood controls that world. All the influences come out of here and they spread, but it’s not the other way around.”

Genesis will run every Saturday through August 23. RSVP at [email protected], but know that it doesn’t guarantee entry so get there early when doors open at 9 p.m.