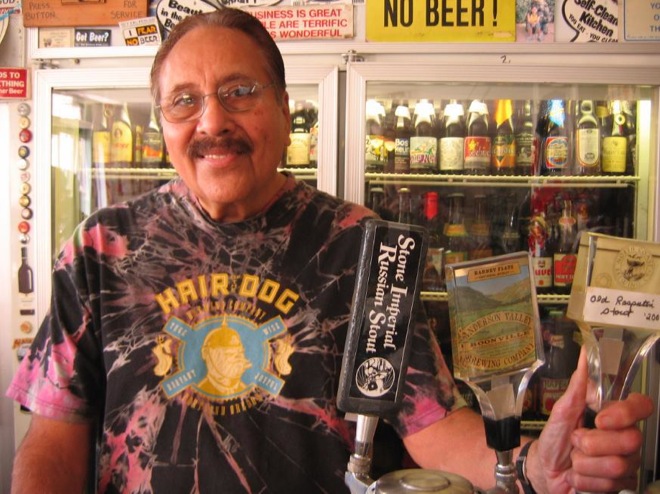 Photograph courtesy of the Stuffed Sandwich

Sam Samaniego of San Gabriel’s craft beer mecca, Stuffed Sandwich, passed away surrounded by family in his home last week after a long string of health issues. He and his wife Marlene have operated the shop since 1976, which is almost prehistoric when compared to the many other craft beer-focused establishments that are now open. With a selection of over 700 bottled beers available and a rotating tap list that celebrates some of the best craft breweries in the world, the Stuffed Sandwich has become a legend.

And until his health began taking a turn, you’d almost always find Sam in the shop, where he was affectionately known as the “Beer Nazi” thanks to his somewhat persnickety demeanor with customers. As Kelly Sycz of Eagle Rock Brewery told the Pasadena Star-News: “If you ordered a really rare beer, Sam would kind of quiz you about it and if he felt like you didn’t know about it he wouldn’t serve it to you. He loved the beer so much and he wanted to make sure it was going to somebody who really appreciated it. There aren’t a lot of people like that anymore.”

Marlene’s announcement of Sam’s passing on the Stuffed Sandwich webpage explains, “As grumpy as Sam liked to pretend [to be,] he had a huge love for all children, animals, and nature.” Because of this, and knowing that both she and Sam have a humongous number of fans and supporters, she’s noted that in lieu of flowers, donations could be made to either of the two organizations that she and Sam have supported for years: the Yosemite Conservancy and/or the Make-A-Wish Foundation of Greater Los Angeles. (Marlene notes: “Please be sure to mention ‘in honor’ or ‘in memory’ of Sam Samaniego.”)

Details on funeral services, a viewing, and a celebration of Sam’s life have been shared by Marlene. All are welcome to come pay their respects.

The author has donated his earnings from this piece to the Yosemite Conservancy in memory of Sam Samaniego.

Why Are There Peacocks on the Street in Glendora?