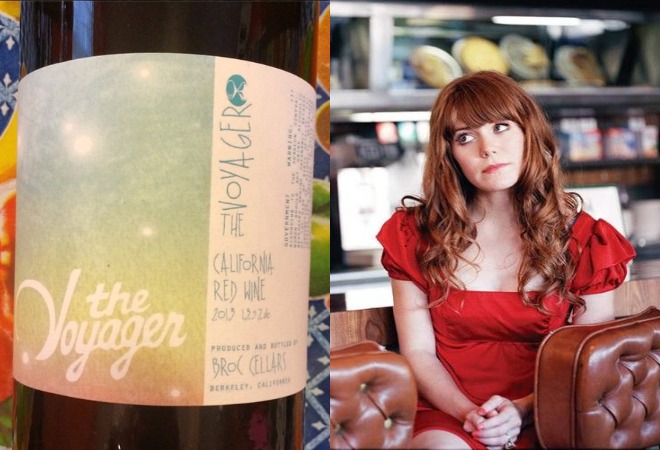 About seven years ago Jill Bernheimer turned her back on the high-octane pace of film production for something a bit more refined and, shall we say, chill: the world of wine.

Bernheimer burst onto the vino scene with the opening of her retail store Domaine LA, where Angelenos were greeted with a broad selection of natural wines and were quickly introduced to her casual approach on a topic often spoken in lofty tones. The store’s tagline reads: “More Wine. Less Attitude.” So it’s all the more fitting that Bernheimer has teamed up with indie rocker Jenny Lewis of Rilo Kiley fame to release a special collaborative wine.

The Voyager Wine ($30 and available for a limited time only) is named after Lewis’ new critically-acclaimed solo album, her first record in six years, and will debut this Friday, August 1st, exclusively at the Domaine LA storefront and website. The wine is a blend of Carignan, Valdiguie and Petit Sirah grapes and was made by Chris Brockway of Broc Cellars in Berkeley. Bernheimer describes the profile as a medium-plus body red with some earthiness to it that skews towards the rustic side of things. In other words, this isn’t another Sammy Hagar, Cabo Wabo tequila fantasy.

“It was an easy process working with Jenny,” says Bernheimer, who will be blasting The Voyager on Friday night. “She’s very open-minded because collaboration is in her spirit. One of Jenny’s initiatives was to partner up with a California producer that focusses on minimal intervention in the production process.”

Each bottle comes with a downloadable link of Lewis’ new album, a marketing move that supports the out-of-leftfield, creative antics of Jack White’s Third Man Records, where flexi-discs are tied to helium balloons and sent out into space. Compared to that, wine seems like a prudent choice.

Best of all, if you can’t make it to Domaine LA, head on over to one of Kris Yenbamroong’s Night + Market locations (one of Lewis’ favorite restaurants), where he has bottles stocked in limited supply to pair with his “hey ha” party wings.