Home Uncategorized How To Make Your Own Bitters by Chef Akasha Richmond and the... 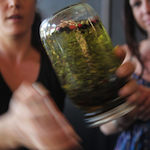 Chef Akasha Richmond of Culver City’s Akasha restaurant has taken her chef-ing skills in a surprising direction: making her own bitters, you know, for cocktails. It all started when she read Bitters: A Spirited History of a Classic Cure-All, With Cocktails, Recipes, and Formulas. “I like to make everything,” she explains. “I make the jam for the restaurant, I make the hot sauce. And then I got this book on bitters and I was really excited. So then I talked to [bar crew Brighid Maguire and Justine Hughes], because you know, we make all the syrups, we press the juice. We should be making these. And they got really into it.”

Akasha introduced the girls to the book, showed them how to make bitters and it went from there. Brighid and Justine, who now call themselves “Bitter Babes,” would meet up on their days off to think up and create new bitters flavors. Cut to eight months later and they’ve made about 20 different flavors and were even finalists at last month’s Bar Keep Bitters Challenge at Greenbar Distillery. They competed against Oldfield’s Liquor Room’s Robin Jackson, Blind Barber’s Justin Fix and Sean Krejci, and Seven Grand’s Dustin Newsome, whose Hot Vanilla bitters ultimately won.

So what’s their criteria for what makes a good bitters flavor? “It’s endless. It just has to be dried things. It can be any kind of spice, it can be any sort of root, it can be any sort of leaf or tea, as long as it’s dried. So the possibilities are endless,” said Brighid. Right now they have flavors like a tomato, fennel, arugula bitters which “smells like a funky cheese,” a chili-lime for margaritas and a sage bitters. That means even fish bitters is doable. “You could use that in a Bloody Mary or shrimp cocktail-type thing,” Justine said.

The bitters inspire their cocktails in terms of how they can highlight certain flavors. Like salt and pepper in a sauce, you don’t use bitters to add flavor but to complement or enhance an ingredient.

The Bitter Babes say that anyone can make their own bitters; it’s as labor-intensive as you want it to be. All you need is high-proof alcohol, preferably Everclear because it lacks flavor (but they’ve used bourbon for their Bar Keep Bitters Challenge entry, Scarlet bitters), dried ingredients, a sealable glass jar and a month to spare.

Here’s a step-by-step on how to actually make it. For this tutorial Brighid and Justine came up with a green tea bitters on the fly and figured would go well in a vodka or gin cocktail. “I can see a lemon, honey syrup, vodka drink with this, it would be so good and refreshing,” said Justine.

4 tablespoons green tea leaves
2 ½ tablespoons methi
1 tablespoons white and pink peppercorn
1 teaspoon coriander
1 teaspoon fennel
Dried zests of two lemons (Dry the lemon zests by placing them in a 200-degree oven for two hours. After you turn the oven off, leave them  in there overnight.)
1 750ml of vodka/everclear

2. Pour a 750ml bottle of high-proof grain alcohol over the ingredients.

3. Store for three to four weeks top side down in a cabinet (no direct sunlight) but make sure to swish the jar around daily.