Home Drinking Cocktails How To Go Big for an L.A. Summer Cocktail Party 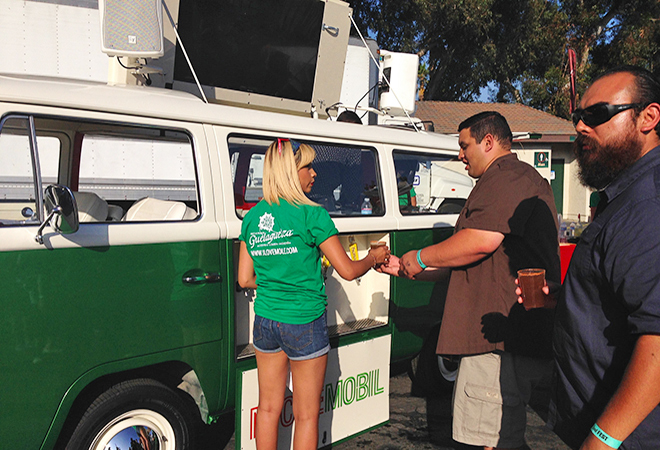 Party starter MicheMobil, a van that makes Micheladas and comes with its own DJ.

Ah, summer in L.A. The nights are balmy, the swimming pool alluring, and everyone has worked out all spring for this very moment. ‘Tis the season for throwing parties; people want to mingle! And sure enough everyone is throwing one. So how do you make yours stand out?

Simple. To throw the L.A. summer soiree to end all soirees, you can do one (or all) of the following. Nothing says Los Angeles like these party options.

Rent the MicheMobil: You may have saw this when it made the rounds this past weekend at the L.A. Street Food Fest and Art Beyond the Glass. It’s a Michelada-making van by the good folks at La Guelaguetza! They just so happen to bottle and sell their own Michelada mix. And for your party the spicy mix is poured into a plastic cup for your guest and then topped up with beer from one of four taps coming out of the MicheMobil. If you don’t have music at your party, the van has you covered, as it houses a DJ booth and two turntables. There’s even a flat-screen monitor atop the MicheMobil for playing your favorite movies, music videos, and photo galleries. For $600 an hour (three-hour minimum) they’ll bring the DJ, serving staff, a beer keg, and the michelada mix.

Throw an SBE-catered party: Hospitality company SBE just launched Collins Cocktail Catering, a service that will transform your party into the SBE bar of your choice, from signature cocktails to bartender uniform to glassware selection. Turn your backyard into the Bazaar, serving your guests liquid nitrogen Caipirinhas and Magic Mojitos or do the Abbey poolside with sexy bartenders and Old-Fashioned Lemonade cocktails. There’s also the option to have the SBE mixologists create signature cocktails just for your party. Prices range from $25 to $35/per person depending on the package. Currently SBE is running a summer promo where you can get 30 percent off a cocktail party for 40 guests, so $2,600 for three hours (normally it’s $3,380).

Hire Magical Mixologists: Event company Magixology, founded by magician/bartender Jordan Gold, pairs Magic Castle magicians with talented craft bartenders to give your shindig that Oooh! factor. We’re not talking children’s party clowns but magicians like “Close-up Magician of the Year” Andrew Goldenhersh. And bartenders like Mandolyn McIntyre (Sotto), Joshua Lucas (Honeycut), and Una Green (Harlowe) will customize cocktails just for your party. Not too shabby considering Neil Patrick Harris hired them to redo the cocktail program at the Magic Castle.