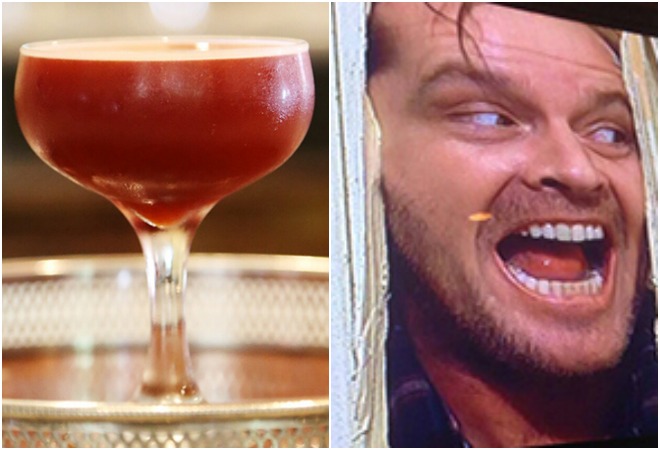 A favorite summer pastime of Angelenos is watching a movie in the great outdoors. In fact, we have many options for how we do it al fresco: drive-in style atop a downtown building, picnicking in a cemetery, or lounging beachside. But one of my all-time favorites is the Alcove Cafe’s “Dinner & a Movie” summer series in Los Feliz where they not only show the featured film on a 17-foot-tall screen on the front patio of Alcove Cafe and Big Bar but also create fun munchies and cocktails to go with it. For a screening of The Princess Bride they made cocktails named “Prepare to Rye!” and “Anybody Want a Peanut?”

The summer movie series, which doesn’t charge a cover, has been going strong for over three years and is getting increasingly popular. Folks have been showing up at 6 p.m. to get a seat even though the flick starts rolling at 8. Worth noting: The restaurant doesn’t take reservations and there is very limited seating. Late-comers usually resign themselves to watching from the sidewalk or across the street.

Movies are culled from suggestions posted on the restaurant’s Facebook page and for the series they make sure to cover every genre so there’s something for everyone. As in previous years, the 2014 lineup consists of flicks you’d want to see with a big crowd of friends, like Swingers and Romy and Michele’s High School Reunion.

When I found out that they are also screening The Shining, a movie that I can’t stop quoting, I asked to partake in their brainstorming and R&Ding session for the event menu. So I met up with general manager Sean Loeffel, digital director/bartender Eugene Lee, and assistant bar manager/art director Ryan Qualis in the Alcove’s back cottage.

With the movie playing on TV we sat around snacking and drinking while doing a running commentary á la Mystery Science Theater 3000, occasionally shouting out dish and drink name ideas. There was talk about a “Brokedown Snow Cat” popsicle, or a “Bear Job” one. (If you don’t get this joke, pay close attention when Wendy is running around the hotel encountering all the ghosts. Cue maniacal laughter.) For cocktails, Eugene is considering a “Blood & Sand” variation called the “Blood & Snow” for that chilling parting shot of the Jack Torrance-sicle. I’m liking the idea of a bourbon and Advocaat booze popsicle.

The details are still coming together for The Shining cocktail menu, but a Red Rum cocktail with Bacardi 8, Angostura bitters, Cherry Heering, Smith & Cross rum, and lime has been decided on. Here’s what they’re going to do for food:

The staff may dress up as characters from the movie. Perhaps there will even be a maze and that unsettling Bartók soundtrack playing. Whatever the case, no matter how many times you’ve seen the movie, you’ll still want to come out July 21 to watch it through the Alcove’s eyes.