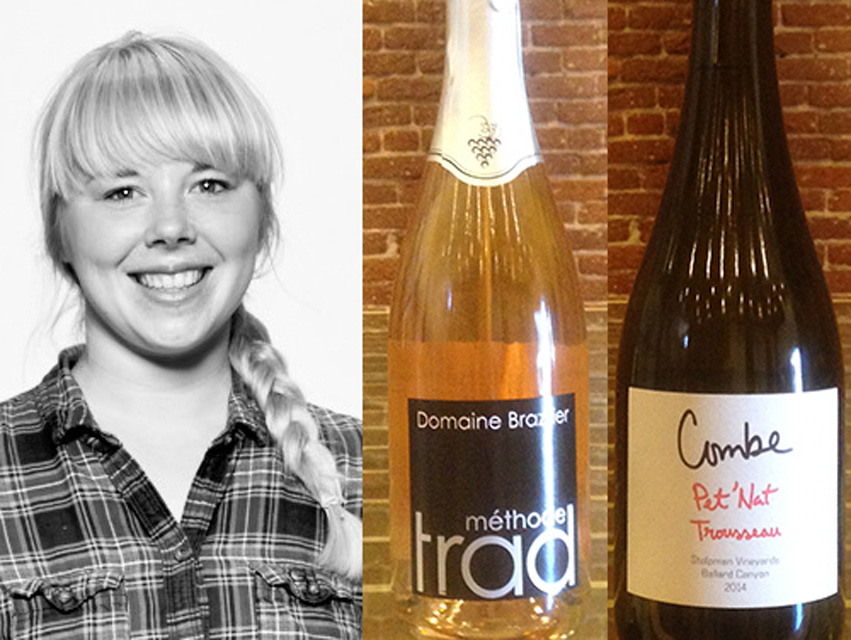 Never mind that the July 4 celebrations are over—with the opening of Silver Lake Wine’s new outpost in the Arts District—the celebrations must, and will continue. And your celebratory theme is going to be rosé—of the sparkling kind. Katie Vonderheide (pictured), manager and wine director for Silver Lake Wine Arts District and ER Bar, has the low-down on some pink and fizzy juice for you to try.

As Katie and I set about devising this month’s Hot off the Shelf picks, I learned of her enthusiasm for pet-nats (petillant naturel wines). “With pet-nats and with everything else in wine that’s using a technique or technology that someone hasn’t seen before there’s always some initial skepticism involved,” said Katie. “There are still some customers who refuse to buy wine that has a screw top!” Of course, I refuse to believe this could be true of anyone reading Liquid LA. Right? Tell me you’re not screw top haters, please!

As for the pet-nats, they are bottled during primary alcoholic fermentation so that the natural CO2 produced is captured and forms subtle bubbles that are fizzy and not as audacious as sparkling wine or Champagne made in the traditional method, where a secondary fermentation happens in the bottle. Katie believes that the stereotypes that sometimes become associated with new production techniques eventually wears away and that good wine will transcend. “Then it just depends on what you are in the mood for,” she says, “cheerful, impressive, vibrant, serious, elegant, etc.”

So get on down to Silver Lake Wine Arts District and ask for Katie’s sparkling rosé picks that you heard about here on Hot off the Shelf.

The Story: “Biodynamically farmed and hand harvested. Jean Braziler and son, Benoît, represent the seventh generation of Braziliers to have worked vineyards here. All of their wine is produced in caves carved out of the limestone hillsides during the 12th-century.”

Tastes Like: “So easy drinking you could do it in your sleep. Would it prompt sweet dreams? Maybe. This bubbly has a dosage of three grams, but I wouldn’t call it sweet. ‘Dosage’ is a fancy way of referring to the amount of sugar added to sparkling wine and we may be getting a little too technical—this wine does not require that: it is fun and cheerful. It has great fruit and for a little added complexity, a bit of pepperiness. This has been a SLW staff favorite for a while now because of its great value and also crushability.”

The story: “Rajat Parr convinced the Santa Barbara based Stolpman Family to graft this oddball grape variety, which has its origins in the Jura region of France. They started with one acre to make a still and a sparkling via the petillant naturel process. There are only 80 cases of this in total and it is the first sparkling wine to be made at Stolpman.”

Tastes: “Quite honestly, I’d just try this one based on its limited availability so you can be one of the ones that are like, ‘I tried it in the first year, in its baby stages, before Trousseau in California became as commonplace as Napa Valley Cab.’”

Katie Vonderheide has worked at Silverlake Wine for about three and a half years—mostly mornings and afternoons so maybe you haven’t met her yet. In the evenings she has always worked at restaurants. Most recently she was the somm at Mozza’s chi Spacca before leaving to work full-time at Silverlake Wine as manager and wine director for ER B, in the Arts District of downtown Los Angeles.