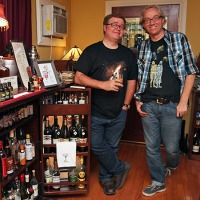 Walking into cocktail geeks Chuck Taggart and Wesley Moore’s Eagle Rock home is like stepping into a cocktail museum. You find yourself oohing and ahhing and pointing at things, yelling, “What’s that?” Fortunately, they have a fascinating story and cocktail history lesson for everything: that Porthole-infusion vessel they bought from the original Kickstarter campaign, Colonel Tigh’s flask from Battlestar Galactica, a vintage silver cocktail set from Chuck’s grandfather. And don’t get me started on their collection of spirits which are not only in their main bar but take up their entire kitchen pantry and are tucked around the seating area in the living room area. Mind where you step.

Suffice it to say their bar isn’t shoved into one corner like most home bars. It pretty much is spread throughout the main floor of their house. They have to do their cocktail mixing in the kitchen since there’s no plumbing at the bar, store their cocktail glasses in the kitchen freezer and display their vintage glassware on their dining room table. There are so many elements to this home bar as they collect everything, compound that with sci-fi geekiness and the geek mind reels. One could spend hours pondering every little stirrer, Fernet shot glass, and sci-fi movie memorabilia.

Here, you will also find the tastiest history lessons thanks to all the rarities. If you want to know what a Manhattan from the 1880s tasted like, this is the place to go as they have the vintage fixings. For amazingly potent chocolate bitters try the Mozart chocolate bitters, a rare Austrian cocktail bitters which Chuck described as “sex in a bottle.” Unfortunately if you want to buy a bottle you’re out of luck as it’s not available in the States. “Some of the stuff you can’t get anymore, like the Hermes bitters from Japan,” said Taggart. “We use those on fairly rare occasions because they were made by Suntory and they don’t make them anymore.”

But the highlight of the bar, which brings everything together, is the boys’ custom-printed cocktail menu, which features not only their own house creations but those of their friends and mentors from all over like Seattle, Portland, and New Orleans. “Its inspiration is from cocktail history to all the fantastic bartenders we’ve gotten to know, locally and around the country. They’ve all been very generous with their knowledge and recipes, and we love to replicate our local and far-flung cocktail experiences at home,” said Taggart.

Between the two of them, their inventory will never run dry and they’ll always have access to the seemingly ungettable. Taggart is a longtime cocktail aficionado and member of the U.S. Bartenders Guild in L.A. while Moore has the very envious job working with Joe Keeper at cocktail boutique Bar Keeper in Silver Lake.

NAME |  Sly Bar
“It’s a Firefly reference. I’ll leave that for the Browncoats to figure out.”

INSPIRATION |  Dr. Cocktail Ted Haigh’s home bar
“I love collecting various bottles and historic spirits. We’re not 1/100th of what Ted Haigh has but along similar lines we have collected a few bottles of vintage booze. His house is a museum of booze. The first time we went to his house 15 years ago, all night we tasted things that hadn’t been made in decades.”

MUSIC |Funky New Orleans music
“We’ll put on WWOZ a lot from New Orleans. It depends on the crowd and if there’s a theme to the party. Sometimes we’re in the mood for all ‘80s but we do like to keep a funky New Orleans atmosphere a lot of the time being the New Orleans boys that we are.”

INVENTORY |Bitters, bitters, and more bitters
“I did count the amari recently. We have 45 different amari, aperitifs and bitters. The most I have of any spirit category is probably the amaro because we’re just amaro-obsessive.” They have nine bottles of different orange bitters alone and nearly every bottle that Miracle Mile has ever done.

CROWN JEWEL | Vintage Abbott’s Bitters
“The pride and joy is the vintage Abbott’s bitters that we got. And we have enough of that to last us the rest of our lives probably if we’re careful with it and share. But now Tempus Fugit is making Abbott’s bitters again. They own the trademark and everything so they’re going to be making these regularly. If you want to know what a Manhattan tasted like in 1880 use a barrel-proof rye and one of those Abbott’s bitters. The best Manhattan we’ve ever made was with Van Winkle Family Reserve 13-year rye, Cocchi di Torino and antique Abbott’s bitters. It’s good with Rittenhouse, too.”

SOURCES | Bar Keeper, online, New Orleans
“Barware has come from all over the place — from Bar Keeper and eBay to antique stores in New Orleans and anywhere we can find things, pretty much anytime we take a trip. We pick up tools here and there as well, from antique shops to BK to Cocktail Kingdom and wherever we find something we like — it’s all about 15-20 years’ worth of collecting.”