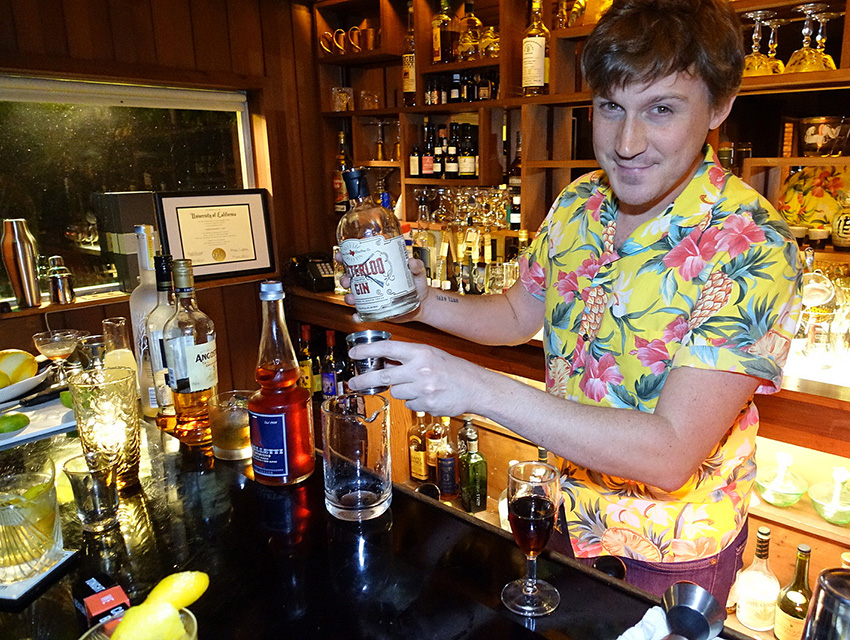 Bartender Christopher Day (General Lee’s, Terrine) got his start making cocktails when he was a kid. His grandmother taught the teenage Day to make her a bourbon and soda, which she enjoyed and still enjoys every night. So very Auntie Mame. His grandparents have lived in this Studio City house, which was built in 1938 and has been photographed by Julius Shulman, for 40 years and regularly enjoyed cocktail hour. It was the culture of their generation, and this was the environment in which Day grew up. “Drinking was ingrained in my entire upbringing; it wasn’t taboo,” said Day. “It was just what people did and it was totally cool.”

So it’s no surprise that the bartender was drawn to the hospitality profession. Even as he worked to get his PhD in organic chemistry at UCLA, hoping to maybe one day teach in a small college, he continued to bartend at establishments like Honeycut. But eventually he traded his academic pursuits, just shy of a dissertation for his PhD, for his first love. “It’s just natural. If I didn’t feel like I couldn’t make a career out of it, I obviously wouldn’t,” said Day. “But luckily I’m growing up in a time where it’s perfect for that and it’s what I enjoy more than anything. Going into work feels just like going back home.”

When Day’s grandfather passed away earlier this year, he moved into his grandmother’s mid-century pool house to look after her and continues to check in on her to see if she wants a bourbon and soda. Bonus for him is that the pool house came with its own The Varnish-size bar, equipped with four taps, plenty of shelf space for booze, a sink, built-in lighting, vintage Moscow Mule copper mugs, and even an ancient Vitamix. Basically your average dream home bar.

INSPIRATION | Grandparents
“My grandparents. The theme is hospitality. It’s nothing else.”

MUSIC | Anywhere between jazz and electronic
“Let’s just say I listen to KCRW a lot. I listen to a lot of Morning Becomes Eclectic, and that’s where I will Shazam something and look up that entire album.”

INVENTORY |Brown spirits
“I’m very rum and whiskey-centric. But because of my status with Congenial, I have a huge appreciation for tequila, so I’ve been bringing that in a lot, too. Since it’s my home bar, I don’t keep an inventory, which is awesome. But I have an entire lower section devoted to amaro and another one devoted to the spirits, rum, whiskey. I’m actually trying to collect apple brandy. I really love Calvados right now. I’m into a lot of things right now so I can’t really pinpoint one or the other. ”

COCKTAIL DU JOUR |Old Fashioned and Bending Blades
“It will always be an Old Fashioned because it’s the easiest thing to do for me. Making demerara syrup is as easy as hell. You just take a bar spoon of it, whiskey, bitters, ice cube, and that’s it. So I do that all the time for myself. When I’m entertaining, I just ask everybody what they want. I’m from the Julian Cox and Alex Day canon, so I love sherry and whiskey anything, but right now I’m really happy with the drink I made that has Tapatio tequila, Manzanilla sherry, Salers gentian liqueur, and Giffard Pamplemousse liqueur. I call it Bending Blades, which sounds more bad-ass than it really is because the bending blades part means blades of grass. I wanted to make something that tasted like rolling through the grass on a spring day.”

CROWN JEWEL | Nothing is sacred
“I actually drank all of it with everybody the last time I did something here, which was the Charbay second-release whiskey. The Charbay was the big one, and I totally poured all of it out for my last event. I learned not too long ago that if you covet things you may never enjoy them. If you have something precious and never open it, that’s great but what are you doing that for? For someone to acknowledge that you have something crazy that no one else has?”

SOURCES | Secondhand shops and antique malls
“There’s an awesome, little shop on Fairfax very close to Canter’s and Plan Check, just north of it, called Jeff, owned by a dude named Jeff. I got some of my awesome coupes, Nick and Noras from him. On this side of the hills, the Sherman Oaks Antique Mall on Ventura Boulevard. I have a little bit of a glassware fetish. And eBay is a trap for me unless I’m really desperate. But otherwise these shops are fantastic.”