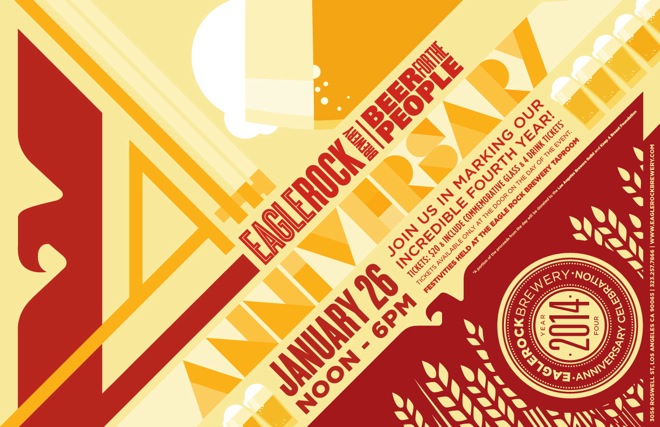 Two local craft breweries are celebrating their fourth anniversaries this week, and each of them brewed a special beer to ring in their new year.

Ladyface Ale Companie has released their aptly named Ladyface 4th Anniversary Ale, a Belgian-style Quadrupel ale spiked with raspberries that weighs in at a hefty 11.6% alcohol by volume. Per their website:

“’Flores et Fructus’ commemorates the traditional fourth anniversary offering of flowers & fruit. It is deep garnet in color with a dense white foam head. Fresh raspberry aroma is followed by dark crystal malts and finally a distinct Belgian yeast profile. Flavors of rum raisin and light toffee, with subtle hop character, are rounded out with just the right amount of fruit. Surprisingly refreshing for such a big beer, 4th Anniversary Ale is deceptively smooth and easy drinking.”

The anniversary beer is now on tap at select beer bars around town and at the Agoura Hills brewery/restaurant. They’re also hosting several special events such as a brewmaster dinner and a barrel-aged beer night, featuring new and vintage releases coming out of ye olde beer vault. More information

(Bonus Ladyface info: Proprietor/general manager Cyrena Nouzille was recently elected to the Brewers Association Board of Directors. Her one-year term begins with the first board meeting in February. Prestigious!)

Eagle Rock Brewery is unveiling its fourth anniversary beer—White Rabbit Imperial Witbier—at a sudsy par-tay taking place this Sunday from 12 p.m. until 6 p.m. Per a release:

“Coming in at 11% [alcohol by volume], White Rabbit is brewed both in homage to our humble beginnings and to celebrate the growth the brewery has seen since its founding. The recipe was originally developed in the planning stages of the brewery as a potential beer in our line-up of offerings. It boasts a bold citrus character and subtle hints of chamomile and coriander.”

Bottles are coming but aren’t quite ready yet, so the anniversary party is the first chance you’re going to get taste this new brew. Tickets include four taster tickets (more are available for purchase), a commemorative glass, and a raffle ticket to win some Eagle Rock Brewery merch; they’re priced at $20, and are on sale at the brewery on the day of the event only. A portion of the proceeds will go to the Los Angeles Brewers Guild and the Keep A Breast Foundation. More information

(Bonus Eagle Rock news: Construction continues on the forthcoming Eagle Rock Brewery Public House, and the brewpub’s chef has finally been announced. Co-owners Ting Su and Jeremy Raub kept it in the family, naming Jerry Su as partner and chef. In addition to being Ting’s brother, Jerry has become a familiar face cooking at many of the brewery’s previous special events. He also has an impressive culinary pedigree to back him up; his most recent gig was as a sous chef at Vinny Dotolo & Jon Shook’s acclaimed Son of a Gun, and he’s previously worked under Thomas Keller at Bouchon Bistro in Yountville and David Chang at Momofuku Ssäm Bar in New York.)