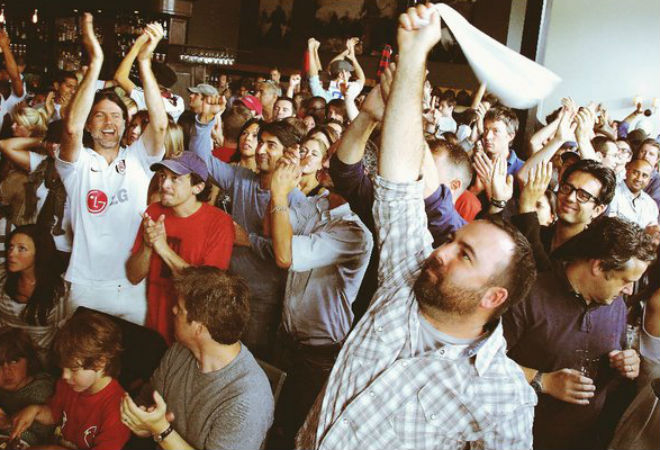 Every four years, soccer fans celebrate the World Cup. Even in the United States, where professional soccer is less popular than baseball, basketball, tennis, and possibly lacrosse, it inspires Americans to suddenly start studying stats and referring to the sport as football.

It’s great to watch games from the comfort of your couch, but nothing compares to the excitement and energy of watching with hundreds of other enthusiasts at your local hangout. For the last two weeks of the competition, the Hammer Museum will screen afternoon matches, but until then, you need a few sports bars to tide you over.

Here are some great places to watch the World Cup in Los Angeles, joints where you can keep it casual and throw back a beer (or two or three). If your soccer knowledge is limited to the fact that David Beckham once played for the L.A. Galaxy, don’t worry, you’ll wind up cheering alongside the fanatics.

Lucky Baldwin’s
The Pasadena pub’s annual IPA Festival coincides with the 2014 World Cup, and customers aren’t complaining. Expect an extensive beer selection and prepare to spend at least $10 if you’re lucky enough to find a seat. Every game of the competition will be shown; the place is known to open in the wee hours to accommodate diehard fans.
17 S. Raymond Ave., Pasadena. 626-795-0652, luckybaldwins.com

Ye Olde King’s Head
Devout Team England worshippers congregate at this Santa Monica watering hole where they can watch the action on more than 10 brand new tellies while munching on special game day fare. If you can wiggle your way out of the jam-packed crowd, head to the gift shop next door and pick up some World Cup memorabilia.
116 Santa Monica Blvd., Santa Monica. 310-451-1402, yeoldekingshead.com

Cafe Brasil
You couldn’t book a trip to Brazil, but you can get a taste of the country amid some of its most passionate soccer fans. Whenever the Brazilian team is playing, don’t expect to have much elbow room.
11736 W. Washington Blvd., Culver City. 310-391-1216, cafe-brasil.com

Bella Vista Brazilian Pizza
Quit dialing Domino’s and opt for pizza inspired by the World Cup’s host country. During the Brazilian matches, the restaurant offers live music and an all you can eat special for $20 per person.
10826 Venice Blvd., Culver City. 310-558-2374, bellavistabrazilianpizza.net

Chilezano
The restaurant only has one TV screen but it’s dedicated to team Chile. All of the country’s games will be shown and the eatery will open early for morning matches.
7238 Canoga Ave., Canoga Park. 818-887-0269, chilenazo.net

Eat.Drink.Americano
For this gastropub’s first showing of the World Cup (they opened in 2012), it’s out to make a lasting impression on the sports-watching scene. A 1,000-square-foot section in the back of the venue will transform into a soccer-viewing space where you can watch starting at 8:30 a.m.
923 E. 3rd St., downtown. 213-620-0781, eatdrinkamericano.com

The Fox and Hounds
Don’t bother strolling in at the last minute when an England or a U.S. match is on; these games require customers to purchase $10 tickets in advance (the fee is later taken off your bill). The San Fernando Valley sports hub will screen every match and will open an hour or two before 9 a.m. games.
11100 Ventura Blvd., Studio City. 818-763-7837, thefoxandhounds.com

Wirtshaus
Catch all the U.S. and Germany matches and test your soccer skills in the traditional German game of Torwand. Make six of six consecutive shots, and you’ve got yourself a free boot of Erdinger beer.
345 N. La Brea Ave, Fairfax. 323-931-9291, wirtshausla.com

The Village Idiot
English and Spanish games generally attract the largest audience, but this hotspot sees a diverse fanbase (the Netherlands drew a surprisingly large crowd in 2010). Have some brunch as you figure out your game-viewing plan; the entire schedule for the World Cup is written on the gastropub’s giant chalkboard.
7383 Melrose Ave., Fairfax. 323-655-3331, villageidiotla.com

The Down & Out
You won’t know where to look in this dive bar that boasts 10 televisions and a 170-inch HD projection screen. Located in downtown’s Historic Core, the bar also has pool tables and a mugshot-themed photobooth. Just remember to keep your eyes on the game.
Alexandria Hotel, 501 S. Spring St., downtown. 213-489-7800, downandoutbar.com

Guelaguetza
The popular Oaxacan restaurant will be showing all the games, but during matches featuring the Mexican national team Guelaguetza will roll out the “MicheMobile.” The truck is a Michelada party on wheels complete with four beer taps, a TV screen, and turntables. Look for it in the parking lot behind the restaurant. It’s never cool to be the first guest at the party, but if you get there early enough you can snag limited edition World Cup t-shirts and prizes.
3014 W Olympic Blvd., Harvard Heights. 213-427-0608, ilovemole.com