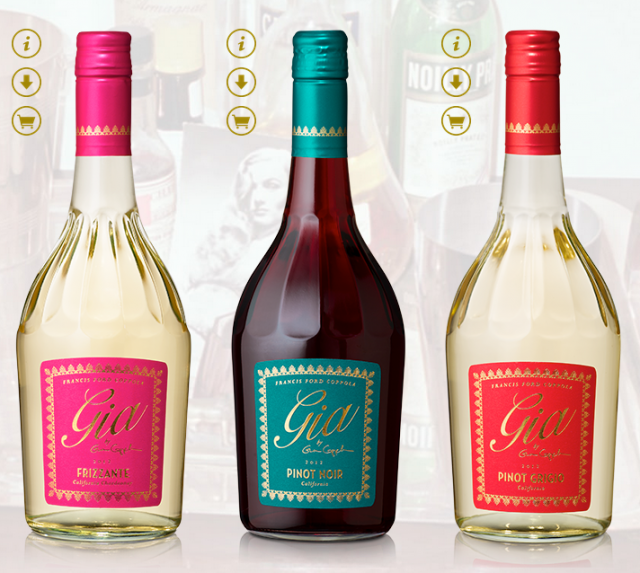 Gia Coppola has her first film under her belt (her directorial debut Palo Alto hit theaters in May) and now she’s embarked on another branch of the family business—winemaking—with her “Gia by Gia Coppola” wine collection. She quietly rolled out the three wines at her film’s prem party, but this was an even splashier affair held last night on the Terrace of the Sunset Tower Hotel overlooking Hollywood. As Gramps Francis Ford Coppola looked on, Gia chatted up the many guests milling about on the Terrace enjoying her Gia Frizzante, Gia Pinot Grigio and Gia Pinot Noir.

I caught up with her by the pool. “I grew up around wine just as much as I did the movies,” Coppola said. “I grew up just kind of mixing my wine on the table with ginger ale and stuff so it was always a part of my life. When I studied bartending and kind of understood the history of alcohol and wine and spirits, it became something that interested me. I wanted to be a part of it and be included as best I could, not just put my name on it.”

Francis Coppola Winery Associate Winemaker Francois Cordesse elaborated. “We do celebrate life, this wine should sing in a glass,” he said. “The way we crafted the pinot noir, Gia gave us a direction, she really wanted something different so the color is lighter like a burgundy and pinot, it’s fizzier also like a Beaujalais. It’s lighter and in alcohol it’s velvety, silky—it’s not geometric and angular—it’s something light on it’s feet. So it’s an every day wine you can enjoy. It’s unpretentious.”

All three wines are light (the Frizzante is very bubbly) and tasty, and the pours were not stingy last night. It’s a good sign when someone takes a sip, smacks their lips and says “Ahhhhh…” which is what was happening as people mingled and sipped. Looks like she’s got a hit on her hands.