Home Uncategorized Get Your Nog On: The 9 Eggnogs to Try in LA 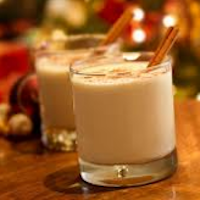 Thanks to L.A.’s 70-degree winter days, one doesn’t immediately think of eggnog as the cocktail to enjoy during the holidays in SoCal. But if you are the traditional type where it’s just not the holidays without that rich cup of creamy, thick nog, you’re not going to let a little sunshine stop you. So for you, here are the best ones to try around town, ranging from the traditional to one topped with beer!

For a nog with a real foodie-pedigree, snatch up a bottle of “Big Daddy’s Baltimore Eggnog.” Handmade by Big Dave Lentz–aka Hungry Cat Chef David Lentz’s dad and AOC Chef Suzanne Goin’s father-in-law–this nog is from a 100-year-old family recipe. “My father gave me the original recipe over 40 years ago…every few years, I tweak it a little to my own satisfaction by changing alcoholic brands,” said Big Dave. Hungry Cat locations and Goin’s restaurants have been selling the family nog for several years and it started when Chef Lentz made his own and ran it as a drink special. His dad thought his was much better and they’ve been offering his version ever since. In this year’s batch Big Dave used Sailor Jerry’s spiced rum, Jameson Irish whiskey, and Christian Brothers’ brandy. You can pick up a 32-ounce bottle for $36 or you can stay and enjoy a glass for $10, while supplies last. (They plan to keep it in stock up to the New Year’s brunch.)

The Hollywood Roosevelt’s Spare Room has two different nog offerings by Beverage Director Naomi Schimek. The single serving “Nog in Sheep’s Clothing” is a rich mix of heavy cream, mulled demerara syrup, marsala, Sheep Dip Scotch, egg, and nutmeg. But, if you want a punch bowl-size nog for you and your crew while you bowl, there’s “Tonight at Noon” made with rum, amaro, eggs, sugar, cream, nutmeg, cinnamon, and garnished with a decadent espresso ice cream float. Order it up in advance with your reservation or for your private party.

For an umami bomb, drop by Feed Body & Soul in Venice for Matthew Biancaniello’s “Umami Milkshake” made with candy cap mushroom-infused Dancing Pines Bourbon, chanterelle-infused cream, egg, agave, and coffee shavings on top. This special holiday nog will be available til Christmas.

Tasting Kitchen’s eggnog is made with cognac, aged Jamaican rum, and Amontillado sherry, “plus all the stuff that makes it rich and fatty–cream, milk, eggs, sugar, and nutmeg,” said barman Justin Pike. But be sure you have someone to tuck you in after drinking one.  “Last year my grandma drank a bunch when I wasn’t looking and had to go to bed at 6 p.m, on Christmas,” said Pike.

For an unexpected variation on the nog, try The Eveleigh’s Mezcal Eggnog by David Kupchinsky. It’s a smooth, smoky concoction of mezcal, Amantillado Sherry, cardamom, cream, eggs, and sugar that would be even better enjoyed by a fireplace.

At Craft in Century City, Beverage Director John Dal Canton infused Goslings Black Seal with candy cap mushrooms, dates and coffee and mixed it with Benedictine, a farm egg, cream, and Garam Masala. The result, which he calls “Jamaican Monk Flippin’ Out,” is a spicy fragrance on the nose and a flip that’s not too rich or eggy.